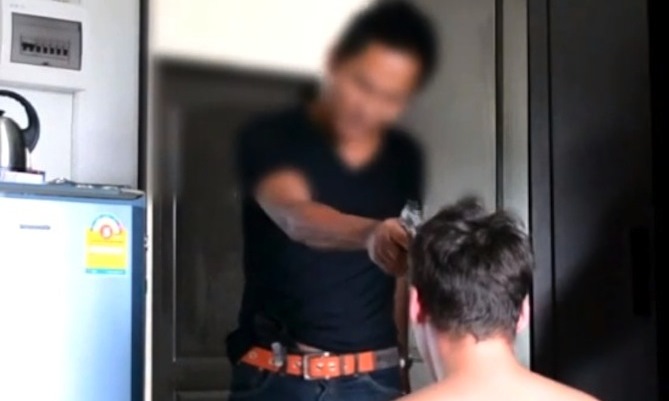 A Russian man living in Thailand unwittingly hooked up with a married woman. Check out this scary video of the woman’s husband confronting him at his door step.

This Russian dude had been living in Thailand since April. He met a Thai woman living in the same building as him and got close with her. What the Russian didn’t know was that the Thai woman was married and that her jealous husband was about to find out that his wife had been spending time with another fella.

One day the Russian heard someone banging at his door, but he ignored it. He set up a camera facing the door so the next time the woman’s husband came knocking he opened it and managed to film what went down.

The Russian dude is completely blameless in this, as he told the police/media that he was led to believe the man was the woman’s brother. He turned down a bribe to keep the threat private and has put the Thai man right in the shit, as officials worry this video going viral will mess up tourism in Thailand.

UPDATE: The Thai guy’s been sent down, so the Russian dude will be screwing his wife extra hard now. Killer.