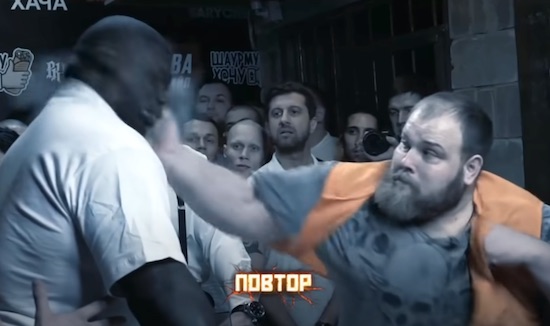 Who will emerge victorious?

Pretty much all sport worldwide has been cancelled due the Coronavirus pandemic, but thankfully the Russian sport of slapping each other in the face until one person quits is still going strong despite the clear and obvious health risks involved with it.

They aren’t half assing it either, as Russian champion The Dumpling comes up against his toughest opponent yet so far in the episode below in the form of some massive black dude called Wagner. They both have WWE style promo videos and entrances now which makes the whole spectacle way more impressive and entertaining, and that’s even before the fight starts.

Check it out below (sorry that some loser dude is commentating on it and giving his takes on it, but I couldn’t find the actual video anywhere else):

Damn – that was one hell of a slapping tournament hey? Can’t believe that it ended in a draw though when one of Wagner’s slaps was marked as illegal because it hit The Dumpling in the ear? I guess they’re playing it like that so everyone tunes into the rematch. I know I’m definitely interested.

I don’t know what the official rules are of the sport are, but I reckon they should have a deathmatch for the next one where they just keep slapping each other until one of them gets knocked out or can no longer continue. Seems like they could both take five slaps no questions asked, so we gotta ramp it up for the next one. Seriously.

For more of the same, check out The Dumpling nearly slapping someone’s head off in a previous match. Terrifying.