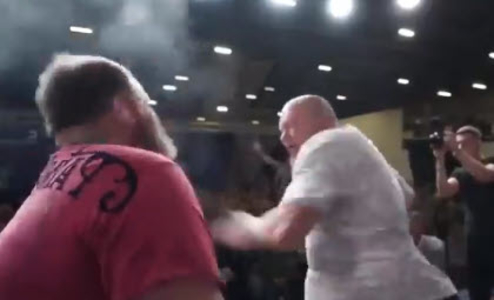 We’ve written a number of stories on Russian slap champion Vasiliy ‘Dumpling’ Khamotiskiy over the years, and they’ve all involved him obliterating his opponents by slapping their heads to the moon and retaining his coveted slap championship.

His undefeated run had to come to an end one day though, and that day came this week after his opponent (whose name I can’t find anywhere – sorry) hit him so hard that he entered a ‘mini coma’.

Devastating stuff. There does seem to be some controversy over the knockout slap though, as the bearded giant who KO’d him raised his feet from the floor and swung his weight around in an apparent illegal move.

Regardless, Vasiliy was gracious in defeat:

It was a good hook, I liked it. I was put to sleep for a little bit. I could have carried on but they grabbed me and wanted to get me out of there.

My biggest mistake? That I’m too nice. I needed to swing myself at him straight away and brush him off his backside. That’s what I’ll do next time, the penny has dropped, just smash him and that’s it.

Well, whether that slap was legal or not, it looks like Vasiliy met his match on this occasion. Which is just as well because let’s be honest, some of the opponents he faced never really stood a chance. Remember this guy?

Total annihilation. Can’t wait for the rematch between Vasiliy and the big, bearded giant. Hopefully we’ll have his name for you next time too.

For the time Vasiliy took on the ‘Bazooka Arms’ synthol freak in a slap content, click HERE. How do you think that one turned out?