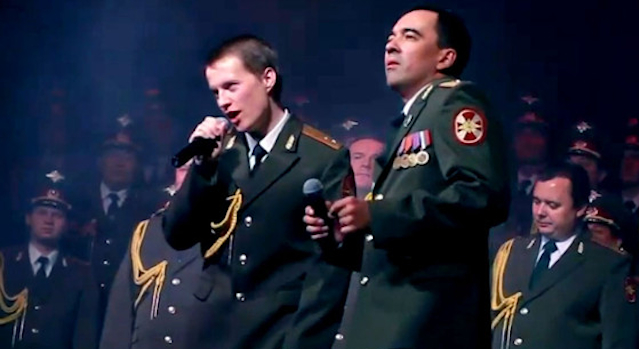 I don’t know why this exists but I’m sure glad it does because it’s one of the most bizarre videos I’ve ever seen.

This could be one of the dumbest videos we’ve ever featured on Sick Chirpse. There’s just so much about it that doesn’t make any sense to me, starting with why the hell the Russian police even have a choir? I thought they were all about being stern but fair and starting a choir surely doesn’t fit into that equation.

Aside from my disbelief that the Russian Police Choir is an actual thing, just why they needed to make this ridiculous video of them covering Daft Punk’s Get Lucky – complete with autotune, weird falsetto singing and a smoke machine – is totally beyond me but I’m glad they did because it’s utterly hilarious. It’s just so weird seeing a bunch of guys dressed up in police uniforms singing an American song in really bad accents.

Apparently this video was them practicing for a concert in the Kremlin last night, which is even weirder because that would imply that they’re actually going to (or already have done) perform it live to people which just seems even more bizarre.

â˜› More Russian Police: Policeman In Russia Gets Taken For A Ride On The Hood Of A Car