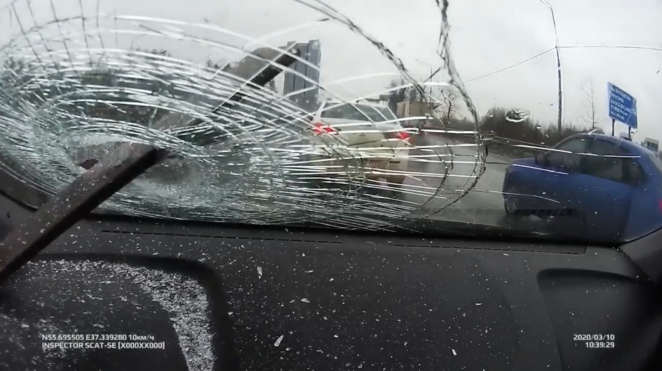 With non-stop stories of people getting sick and dying of coronavirus, it’s nice to see someone stare death in the face and catch a serious stroke of luck in what should have been a surefire death scenario.

The clip comes out of Moscow, Russia, where this guy is driving along the motorway and minding his own business. Suddenly, this metal rod comes catapulting out of nowhere and blasts through the windshield right in front of him:

Wow. Imagine the impact if he was moving at high speed at the time? Our Russian friend would be a goner for sure.

What’s even crazier to imagine is if he had been quarantining and washing his hands non-stop all this time only to have a chunk of metal come out nowhere and pierce him through the heart as he’s driving. Boy would that be a harsh way to go out. Maybe a reminder from beyond to stay indoors for the time being. Just self-quarantine and get pissed on vodka until he forgets the hellish sound of that metal clanging through his windshield.

For the rapper who tried to be cool while filming his music video only to end up breaking his mate’s windshield, click HERE. I hope he’s got insurance.