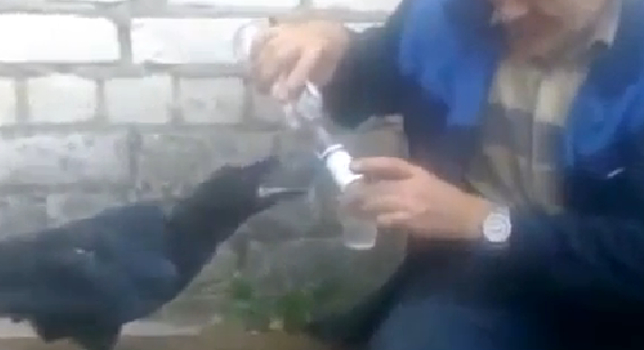 One Russian man has found the ultimate solution to the problem of drinking alone – drink with a crow instead.

Sometimes you just end up drinking on your own and it can be kind of fun but it also kind of sucks because you’re sitting around drinking on your own having pretend conversations with yourself, being creepy/weird to people on the internet and wishing that all of your friends didn’t hate you that they would go drinking with you. Or maybe that’s just me.

In any case, one Russian dude has an ingenious way to solve this problem, as he decided to sit on the pavement with a bottle of vodka and befriend any crows that came flying past. One such crow turned up and seemed to be having a pretty good time as the Russian man fed it shot after shot after shot after show of the finest Russian vodka, and also managed to give him some weird looking food to eat.

I’m sure someone will moan about how this is cruelty to animals, but having watched the video it looks like they’re both having a blast so I would argue the opposite. Next time I’m drinking alone, I’m going to go searching for a crow.

â˜› More Crows: The Stoner And The Crow