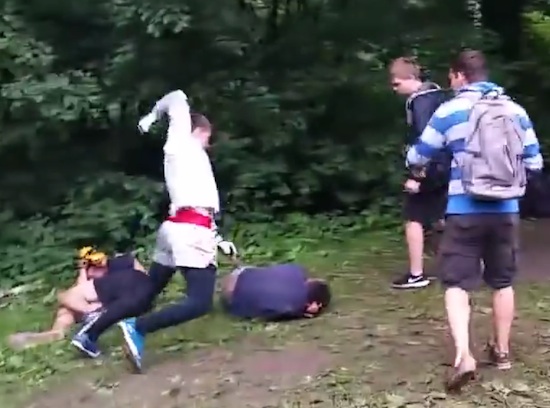 Taking hooliganism back to the dark ages.

Everyone knows how much Russia is into hooliganism following the events in Marseille with England fans last summer, and it seems as if they haven’t skipped a beat in their preparations for the World Cup 2018 if the scenes in the video below are anything to go by.

The video shows a whole bunch of football fans meeting in the Russian forest to duke it out before (or maybe after) a big football match between CSKA Moscow and Spartak Moscow. Hell, maybe there isn’t even a game on and they just met up in the forest to beat the shit out of each other, who knows?

Anyway, the brawl is pretty medieval as they line up opposite each other in a field and then unleash fists of fury on each other:

Love the way they regularly beat the shit out of people on the ground in two on one situations and also how they chase the losers out of the field at the end of the fight. Very hard.

In all seriousness though it’s kinda terrifying that people still think it’s a fun time to fight over football. It seems like most of that has finished in this country, but in Russia it seems like it’s only just beginning. Be careful if you’re planning on heading over there next summer.

Have you heard about how one Russian politician is planning on turning hooliganism into a spectator sport? I suppose it would be safer, as ridiculous as that sounds, and there were a lot of people standing around watching in that video so I guess there’s demand too. Maybe it will happen soon.