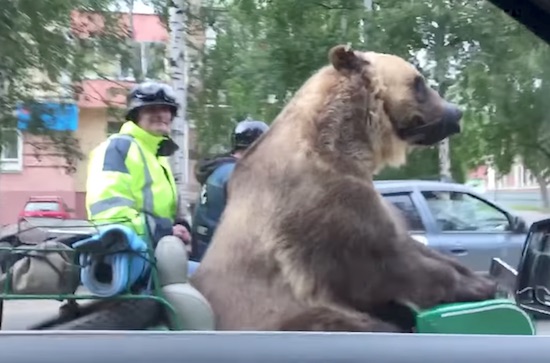 It’s well established here at Sick Chirpse that we think that some of the things that go on in Russia are completely weird and beyond bizarre and this video is going to be added to that long, long list.

I’ve got no idea what the context for this is or where it is other than somewhere in Russia, but the video below features a couple of guys riding along on their motorbike with a gigantic bear sitting in the side car. Neither the bear or the guys are acting like this is a big deal – in fact they seem so oblivious to it that it probably qualifies as normal behaviour for them.

Lol. I think the best part about the whole video is how excited the guy driving the car gets about seeing the bear. It kinda sounded like it was the best day of his life to be honest. Especially liked how he ducked and weaved through the traffic so he could get up close to it and then just burst out laughing. Totally worth it.

For more bears, check out this video of the most human like bear you will ever see. Of course it’s from Russia too.