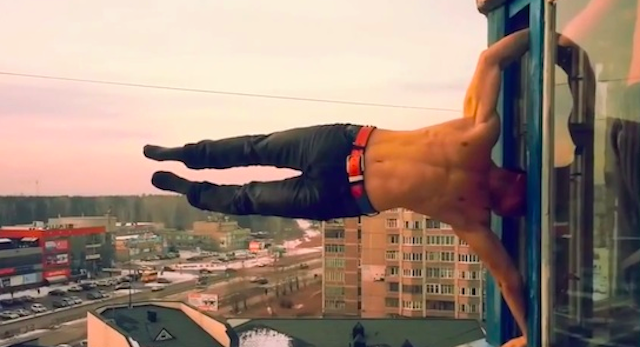 It’s a shame that this guy’s video is so laughable because he has got some bare skills, just really bad music and editing taste.

We all know Russians are completely crazy so this guy doing this shouldn’t really come as that big a surprise to us but even so, it’s still completely and utterly mental that this guy would want to risk his life just to look like a complete and utter badass , because I’m pretty sure he could do these exercises pretty much anywhere and it would still have the same effect.

I’m not a big workout guy though so maybe I’m wrong about that, but I’m pretty sure even if there were some gains to be had from performing these exercises here then the cons outweigh the pros because you could quite easily die just by slipping or something, which you don’t really have that much control over.

Still, I guess he almost completed his goal of looking like a complete and utter badass and having the ladies are queuing up round the block for him now, it’s just a shame that the video he produced to go along with it is so laughable that everyone is probably just going to think he’s a twat. Honestly, why would you put this dumb backing track on it and have a scene where he yells ‘DJ, spin that record!’