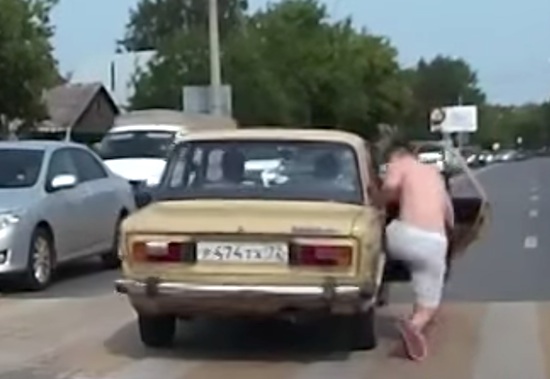 You don’t want to mess with this crew.

One of the biggest contributions Russia has made to internet culture is the crazy amounts of dashcam road rage videos which seem to get wilder and wilder every time a new one pops up online.

As such expectations were pretty high for this video, but unfortunately things came to an end before they even really got started.

Check out the look of sheer disappointment on the guy who didn’t get to use his baseball bat.

I’ve never seen a group of guys look so deflated before in my entire life. Every one was raring to go, only for that poor bloke in the vest to get KO’d in one punch. According to the uploader he was telling off the driver for riding recklessly around kids, but even if they were he probably shouldn’t have yanked their car door open like that. That’s going to get an aggressive response every time, especially in Russia.

For the time some nutter turned the phrase ‘Russian dash cam’ completely on its head – click HERE.