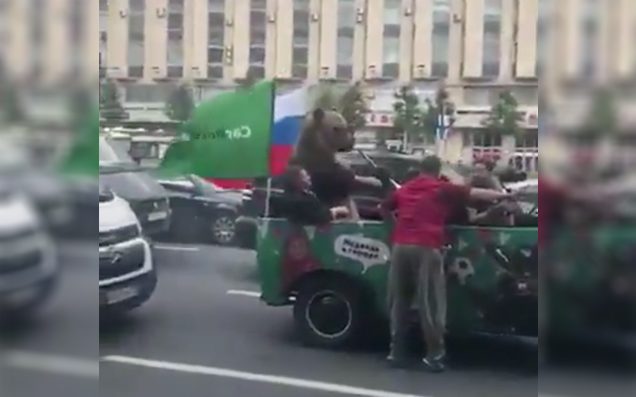 Is this real life?

If you’ve been reading Sick Chirpse for a few years you know that bears are low-key some of the fascinating and talented creatures on the planet.

Well as the World Cup got underway yesterday, this absolute unit rolled up in the back seat of a topless jeep just casually playing a vuvuzela – the unofficial musical instrument of the World Cup:

In Russian culture the bear traditionally appears as the image of a good-natured and a somewhat dumb animal, undoubtedly possessing certain charisma. In folklore the Bear is usually named affectionately and respectfully as a man: Mishka, Mihailo Potapych, Toptygin, etc. So it is evident that the Bear is more likely a kind neighbour, or a guard, never a tyrant.

As you can see visiting fans thought it was the greatest thing they’d ever seen. Others on Twitter however saw it as an act of animal cruelty:

Awful treatment of a beautiful animal.

This comes after the Russian football team were criticised by animal rights activists for using a bear to deliver a match ball during a game between third-tier teams Mashuk-KMV and Angusht:

Well, we may as well post some more bear GIFs while we’re at it:

If you ever find yourself face to face with an hungry bear, you might want to take notes from this Swedish bloke who managed to avoid being eaten alive.