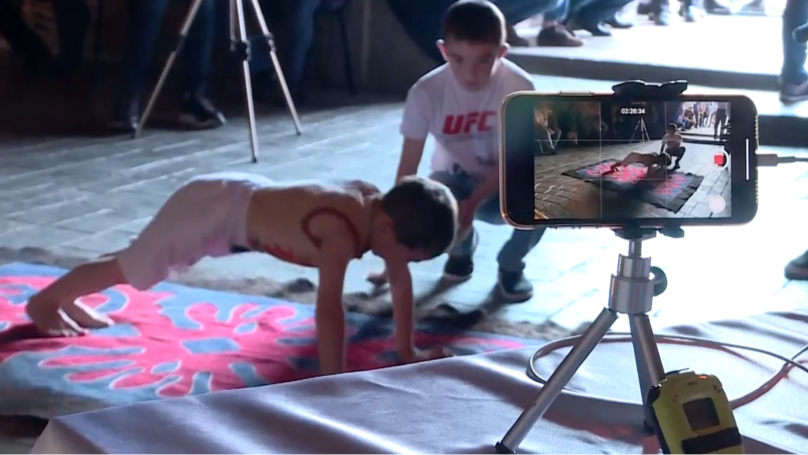 That’s how we do it in Soviet Russia.

I don’t know what you were doing when you were six years old – probably getting an ice cream and going to the zoo or something – but over in Russia they’re making their kids work for them at that age and some of them are really doing their parents proud if this video is anything to go about.

Shot over in Novy Redant in Russia, the video features a six year old boy named Ibrahim Lyanov as he’s coming towards the end of an incredible two hour press up challenge, where he’s apparently managed to perform 4445 of the bastards, setting a new world record in the process. Can you imagine?

Not only did Ibrahim set the record though, but he also managed to snag himself and his family a free apartment for his achievements! Not bad hey.

Here’s some video footage of the end of his ordeal:

Yeah I mean I know he stops a couple of times there but come on, the kid is doing over 4000 press ups continuously for two hours, I bet you probably couldn’t even do 40 without giving up.

I gotta be sceptical about this story though to be honest. No doubt that Russia has an interest in making their kids as tough and dominant as possible so they can dominate the UFC for years to come, but it seems a bit weird that they’re making them do tasks as gruelling as this and then rewarding them with free apartments.

It’s also kinda weird that a lot of reports have the number of press ups completed as different throughout them whenever they’re mentioned and that the video footage isn’t of the kid celebrating once he’s done them all and secured the record/apartment. Whilst it doesn’t surprise me Russia are pushing their kids to the max and even have guys counting their push ups like in the video, something about this whole scenario sounds a bit fishy to me. Just saying.

For more of the same, check out this five year old boy doing 90 degree press ups and absolutely nailing them. Guess it’s easier at that age or something?