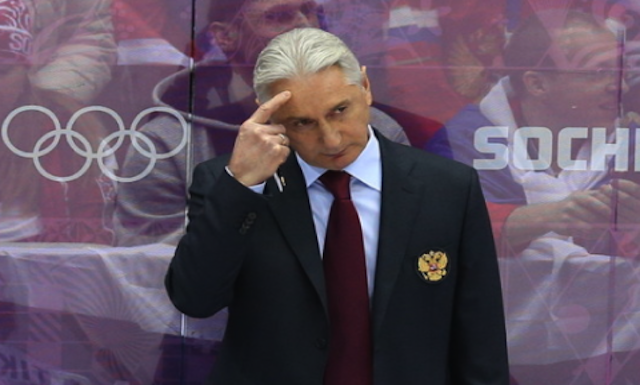 Did he actually take the suggestion that they were going to eat him alive literally? This is Putinâ€™s Russia weâ€™re talking about, so you never know.

Zinetula Bilyaletdinov faced a crowd of stunned Russian journalists after Finland eliminated Russia from the men’s hockey tournament at the winter games. The whole of Russia is pretty vexed at him and demanded answers immediately after the game — here’s the translated exchange he had with reporters, which he handled like a complete G:

(via) At a news conference at Sochi’s Bolshoy Ice Dome shortly after Russia’s loss to Finland:

Q: Is this a catastrophe?

A: This has certainly been an unsuccessful appearance.

A: Let’s not play with words. I told you, we were unsuccessful. Call it what you will.

Q: Mr. Bilyaletdinov, in what way, exactly, do you see yourself at fault for what happened? What would you have done differently if you could turn back the clock? Maybe you should have played [Alexander] Ovechkin and [Evgeni] Malkin on separate lines?…Did you want to try this, and if so, why didn’t you?

A: I don’t want to talk about this now. I’m at fault for everything. I didn’t fulfill the task before me.

Q: What do you have to say to the fans? 12,000 came to this match and many more watched on television.

A: I apologize to the fans for this result. We were unsuccessful, and the expectations were totally different.

In a scrum with Russian reporters after the news conference:

Q: You said that the analysis will come later. But what mistakes can you talk about now?

A: There were individual mistakes. That’s why we couldn’t affect the result even though we had twice as many chances as the opponents. We just couldn’t score.

Q: What future, if any, do you see for your own work and for your coaching staff? Because, you know, your predecessor was eaten alive after the Olympics–

A: Well then, eat me alive right now–

Q: But we have the world championship coming up!

A: Well then, there will be a different coach because I won’t exist any more, since you will have eaten me.

Q: But you’re staying, aren’t you?

A: Yes, I will remain living.

Did he actually take the suggestion that they were going to eat him alive literally? This is Putin’s Russia we’re talking about, so you never know. The reporter’s probably just asking about the negative headlines and shit talking people are going to be doing about him but he’s pretty much going “You want to eat me alive then do it! Come up here right now and eat me alive! Come on! I dare you!”. Might even be less horrific than what Putin has waiting for him. Awesome way to handle the loss though.

â˜› Read Next: Russian Volunteer’s Stomach At Sochi Olympics Is The Talk Of The Town