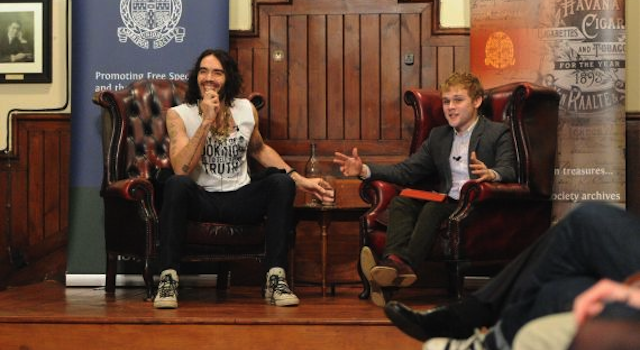 Russell Brand pulled no punches when talking about his proposed revolution during a recent talk at the University of Cambridge.

Love him or loathe him, Russell Brand sure has a way of getting his point across.

Brand addressed the student body at the Cambridge University Student Union a couple of days ago and unsurprisingly the talk swiftly moved onto his proposed revolution and as usual he uttered a bunch of notable sound bytes attempting to inspire people to take action and initiate immediate change within the current governmental system. His solution was to stop voting: ‘It’s meaningless, it’s pointless. It makes no difference. Give us something to vote for, and then we’ll vote for it’.

Russell also stated that the time for action was now and the only way to facilitate lasting change was to pretty much start a riot: ‘They’re only in charge of us if we allow it. Complete noncompliance, complete disobedience, then the alternatives will emerge. We need to create a paradigm that makes the old one obsolete. That’s what we have to do’.

Love him or hate him and his ideals, you’ve got to admit he’s got great charisma and rhetoric that would really get the everyman on his side. He should probably run for Prime Minister himself – he would win by a landslide given his current popularity and the disdain for the current incumbent government.