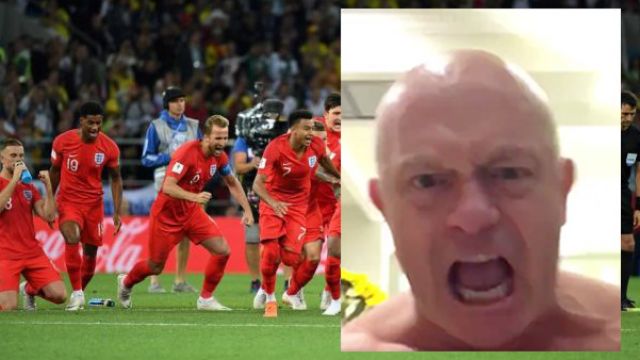 Lay off the coke mate.

I’m fairly certain that everyone reading this will have at least heard about the fact that England managed to win their first ever penalty shootout at a World Cup by beating those dirty Colombians 4-3 last night, and I’m also fairly certain that most people reading this would have had a similar reaction to that by screaming their heads off and running around thumping all their buddies on the chest shouting ‘it’s coming home’. That’s football for you.

However, even though the nation was united in these feelings, I don’t think any of us felt the need to tweet or share video reactions to the win in the style of Ross Kemp. Ross was clearly loving it and seemingly on the blow as he took to Twitter to record a topless video of him explaining just how much he loved the result and some other standard nonsense that every England fan was spouting:

Lol what a joker. I mean in fairness it probably does encapsulate the thoughts of the nation, but it’s just so weird that he would think that it was a good idea to share a video of him clearly off his face and being a nutjob with the whole world. I guess that’s just what an England World Cup run does to people though. Can’t wait to see how Ross Kemp celebrates when we win the goddamn thing.

For more Ross Kemp, check him out talking about the time he almost lost it and killed a child sex trafficker. Kinda surprised he didn’t considering the above video.