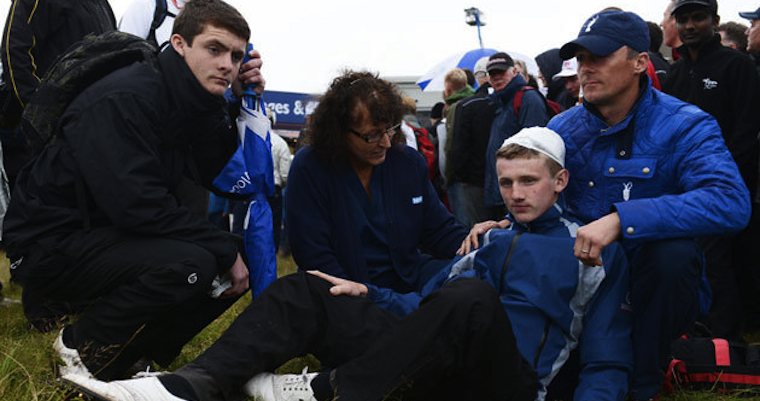 Rory McIlroy just hit some idiot in the face with a golf ball, and it’s not the first time he’s done that either.

Rory McIlroy is some kind of golfer I guess. I don’t really follow golf – I like playing crazy golf but that’s about it – but I’ve heard the name Rory McIlroy before so I guess he must be a good golfer or something. Or at least well known in the golfing community or something.

Anyway apparently there’s some big golf tournament on and Rory McIlroy is playing in it. That’s probably really exciting if you’re really into golf and/or Rory McIlroy and like spending your weekends sitting around watching it on a couch like a bunch of my friends who might as well be semi-retired who do that all the fvcking time. It’s boring. I never go when they invite me so they stopped inviting me. In fact we don’t even really hang out that much more.

But I kind of wish I had been there for this one. Rory McIlroy pings a golf ball into the crowd and whacks some guy in the head with it. I don’t know if this happens often in golf but this was actually pretty funny because the loser in the crowd got really screwed up. The ball hit him right on the top of the head and everyone in the crowd was screwing and running over to help him and he needed loads of bandages and shit because he was so fucked up. I’m not really sure how getting hit in the head with a golf ball would lead to you needing a bandage, but it happened so there you go. Even more hilariously the loser’s name was Jason Blue. I don’t know why I find that so funny but it just is – imagine if your surname was a colour! It would fvcking suck.

The best thing about it though was Rory McIlroy’s reaction. He just walked over there, looked at him, didn’t even really say anything in terms of ‘Hey, I’m sorry’ or anything but instead just signed a glove and threw it at him, then walked off like a complete badman. It’s like Rory McIlroy made golf cool. Almost. Check out the video below:

When I was trying to find a video of this Rory McIlroy incident I found out that this wasn’t the first time he had whacked a gold ball into somebody’s head either and they he did it a couple of months ago too. Again, he signed his glove and gave it to the fan. He’s probably had to do it a million times. How the hell is Rory McIlroy so well known in the world of golf (and presumably pretty good) if all he does is hit people in the head with golf balls? Can someone please help me out with that one? As an aside, don’t you think golf would be so much cooler if the objective was to whack golf balls at people? Anyway, y ou can check out that video of Rory McIlroy  slamming someone else in the head with a golf ball below, although it’s kind fo falsely advertised because all you really see him do is take a shot and give the fan a signed glove, it’s bullshit. I guess that’s why golf is so crappy.