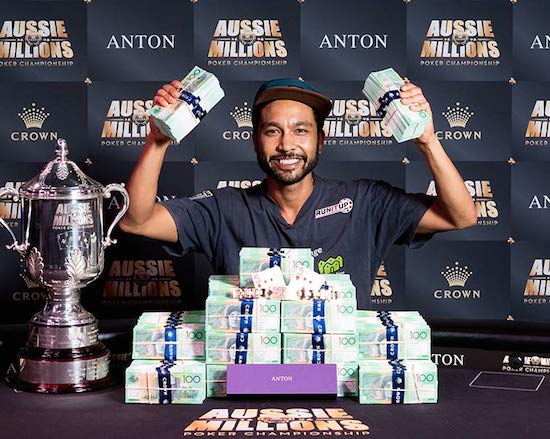 Feelgood story of the year.

Anyone who has ever played a hand of poker dreams of winning it all, but the sad fact of the matter is that most amateur players don’t have anywhere near what it takes to even beat their friends consistently, let alone take down an entire tournament.

One guy you’ll never be able to say that about again though is Shurane Vijayaram from Australia. He recently entered the Aussie Millions tournament for $135 and incredibly managed to win the entire thing, bagging $1.6 million in the process in an unbelievable Cinderella story.

Check out the video below where he wins the final hand against Ben Heath in the main event, and then a short interview with him after about his poker career so far and how he got to this point:

Wow – that’s an absolutely huge call on that last hand to win the tournament isn’t it? Even crazier is the fact that the dude seems remarkably unbuzzed about winning $1.6 million in the interview afterwards doesn’t he? What an absolute chiller.

But yeah, it’s just proof that it can happen if you keep trying and just go for it. Get down to your local poker tournament today.

For more unbelievable poker hands, check out the opposite side of the spectrum, with what is arguably the worst bad beat in poker tournament history. This is a real tough one to take.