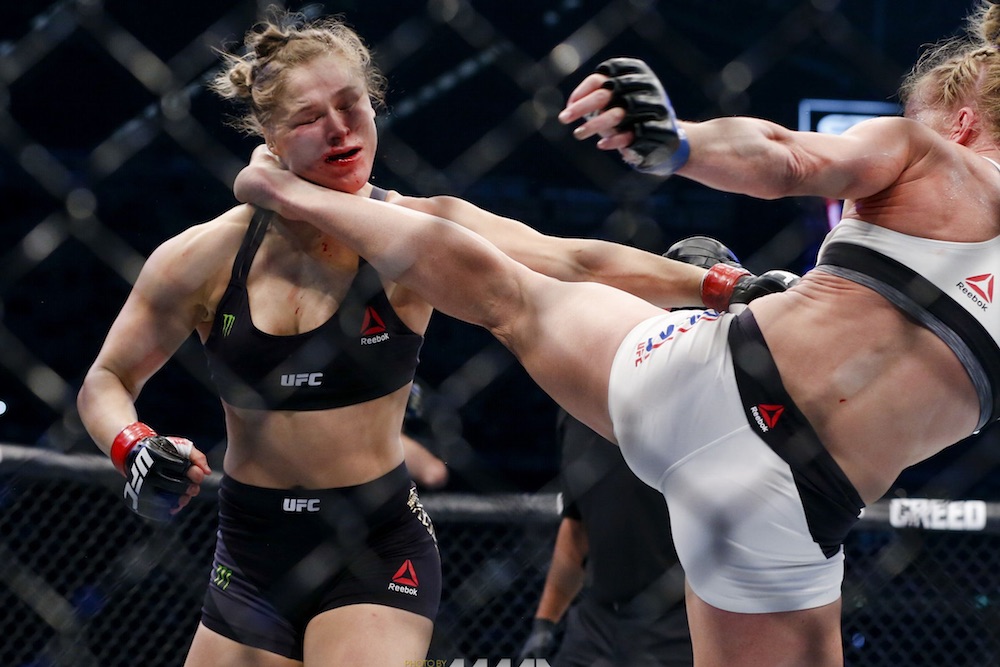 The unthinkable happened last night at UFC 193 in Melbourne, Australia when Ronda Rousey was knocked out within six minutes by Holly Holm, losing her UFC women’s bantamweight title in the process.

Even though Rousey had beaten Holm before and was the overwhelming favourite after annihilating Bethe Correia in less than a minute in her last fight, Holm had the perfect strategy to defeat the champ. She refused to be bullied like Ronda’s other opponents and patiently bided her time to land some sweet counterpunches right in Rousey’s face, splitting her open in the first round – this was also the first round Rousey had lost in her entire UFC career.

It was to get even worse for the champ in the second round though, where she continually tried to dominate Holm but kept getting countered, until she was KOed with a kick to the face. Unbelievable.

You can watch the full fight below (highly recommended) or just skip to the end for the knockout.

Wow. Like I said, I didn’t see that coming and to be fair Ronda got absolutely battered by the 20 to 1 underdog. Crazy.

There will probably be the inevitable criticism that Ronda wasn’t paying enough attention to a fight that everyone thought she would easily win and was concentrating more on her media commitments, but if you look at her hanging her head in shame at the end of the fight you can tell she’s really gutted about this. Ronda said she wasn’t going to fight again until UFC 200 but that might all change now that she’s been defeated finally as I can imagine she’ll be eager to get out there and prove that’s she still an elite fighter.

Stay tuned for her next move. In the meantime check out this compilation of awesome knockouts: