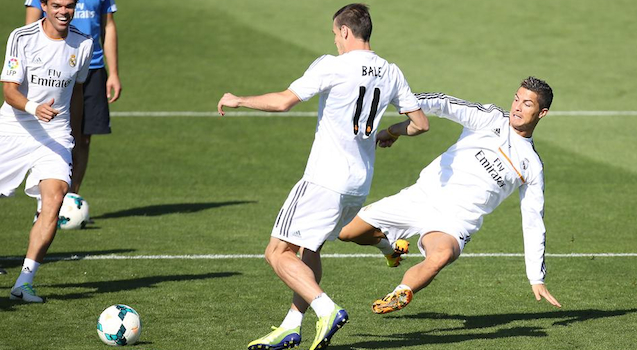 In case you’ve been living under a rock all summer, then you probably will have heard that Gareth Bale eventually moved to Real Madrid for an alleged world record fee in the most protracted transfer of the summer.

Immediately concerns were raised about how Cristiano Ronaldo would react to no longer being the world’s most expensive player and just how he and Bale would fit into the same team. Of course, they’re probably both good enough to be able to play in the same team but football players – especially Ronaldo – are known to have huge egos and there was no telling just how he would react.

It all seemed good to begin with though – there’s a video online of them shaking hands in the car park of wherever Real Madrid train and looking pretty happy to meet each other – but it seems there may actually be a bit of beef between them following a training session today.

The Real Madrid gang are doing that drill where a couple of players are trying to get the ball off everyone else and you have to keep the ball and make sure the defenders don’t get it, when out of nowhere Ronaldo slides in HARD on Gareth Bale. I don’t know how these training sessions usually work but I imagine players wouldn’t usually go in hard on each other as they wouldn’t want to injure their own teammates. Not Ronaldo though – he just went for it.

Gareth Bale’s response was pretty much Gareth Bale in a nutshell though. Instead of getting angry and going crazy he just calmly chipped it up over Ronaldo to retain possession, and then when he next got the ball nutmegged Ronaldo as nonchalantly as you like. This led to all of Ronaldo’s teammates completely rinsing him, and no doubt endeared Gareth Bale to all of them. Benzema looks completely shocked that he even did it whereas Khedira goes up to Bale and shakes his hand immediately! Nice one buddy – good luck on your debut tomorrow.