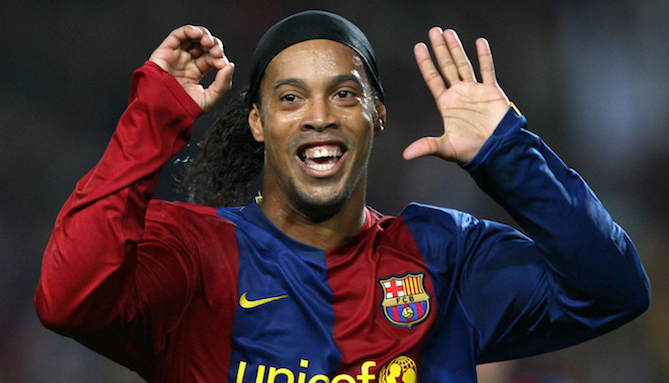 Ronaldinho is one of the most famous famous faces in the world, so out of all the products he could promote why has he chosen to start his own condom brand called ‘Sex Free?’

I don’t really understand this. Pretty much everyone in the whole world knows who Ronaldinho is, even now. Although- like so many Brazilian superstars these days – he got kinda fat and lazy in his later years and went back to Brazil to play football, everyone in the world stills knows who he is due to the fact that he helped Brazil win the World Cup in 2002 as part of the three R’s (with Ronaldo and Rivaldo) and then pretty much killed it in the Barcelona team that was starting to make waves in world football just as Messi was working his way through the ranks. And also because he’s got a really weird/ugly face.

So, it seems really strange in my mind that a guy who could probably put his face, name and branding on any product in the world would choose to stick it on a bunch of condoms in his native Brazil. I mean I guess there’s an argument that maybe he actually cares about overpopulation and safe sex and teenage girls getting pregnant etc, but given the fact that he is (or at least was) a notorious party animal and serial shagger I don’t think it’s that realistic an option.

So yeah, the whole thing seems kind of bizarre to me. I guess they could have thrown a lot of money at him for it but again that seems kind of weird/unnecessary as the guy is already a millionaire, he doesn’t need a load of money to advertise condoms.

But the fact that the condoms have the crest of Ronaldinho’s current club – Athletic Mineiro – and he’s wearing their strip in the promo ad  gives us a clue and suggests that the condoms could actually an idea stemming from the club? Again this is really weird – I mean who the hell thought of branding condoms by football club? It’s hardly the target audience, I mean it’s unlikely that a bunch of drunk ultra fanatical football fans are going to be practicing safe sex is it?

The fact is they would probably buy anything that has an Athletico Mineiro badge on them though, as football fans are nothing if not fiercely loyal, so perhaps it is a concerted effort by the football club to introduce the concept of safe sex into their fanbase? That’s the only explanation I can think of really and the club could have roped Ronaldinho into advertising them as part of his club duties in his contract. It makes sense, even if it is really weird. Does anyone else have any ideas?

Also it’s even weirder/more nonsensical that the brand of condoms is called Sex Free? What the hell kind of name for a condom is that? Is it designed for posh wanks or something? Or for having sex with holographic aliens? Truly weird.

Hey Looks, It’s A Liverpool Shirt Made Out Of Condoms