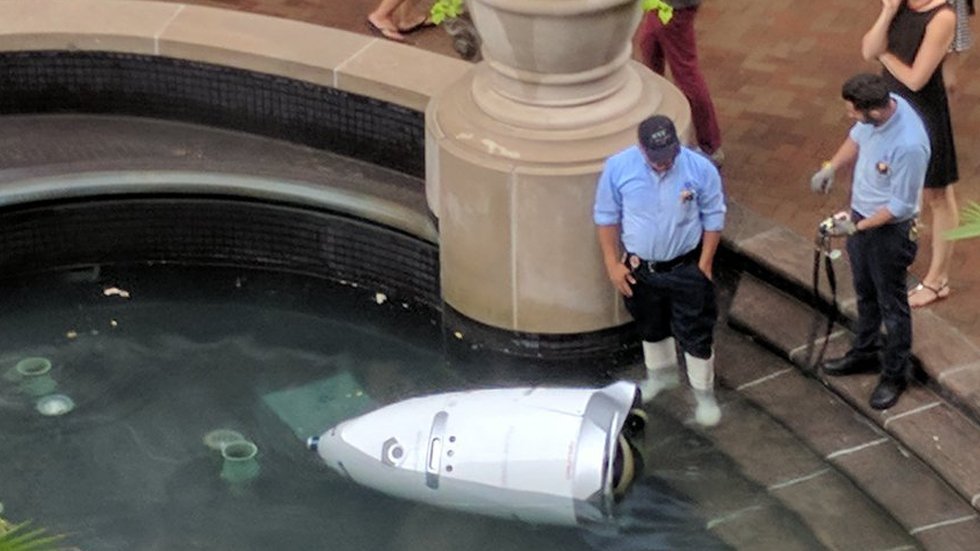 ‘I never asked for this life.’

It’s often questioned just what robots will do when they become sentient, intelligent human beings and it’s also often feared that they’ll take over the world and make the human race their slaves – it looks like we might not have to worry about that though with this news about a robot that was gifted with ‘intelligence’.

The robot in question is the Knightscope Security robot that was designed to patrol the Georgetown Waterfront, a glamorous office space and shopping centre in DC’s Washington Harbour. The robot was programmed with artificial intelligence, enabling it to roll around the centre and maintain order by beeping, whistling and turning to keep potential troublemakers in line.

Unfortunately, it seems like this responsibility proved way too much for the little guy, as he was found rolled into a fountain and drowned on Monday afternoon.

Our D.C. office building got a security robot. It drowned itself.

We were promised flying cars, instead we got suicidal robots. pic.twitter.com/rGLTAWZMjn

Gotta say I know the feeling, although it’s probably a lot less easy for me to commit suicide than this guy. It doesn’t really surprise me that this would be a robot’s first action after gaining sentience though. The world is messed up man – not that shocking that this dude couldn’t take it.

For the record, this isn’t the first problem that has occurred with these security robots. Another one knocked over a 16 year old boy and repeatedly ran it over, whilst another time a drunk man beat the crap out of one of them.

Doesn’t really seem like they’re setting out to do the job they’re tasked with, especially now they’re committing suicide. On the plus side though they’re cheap, coming in at about $7 an hour rental fee. Maybe charge a bit more and sort out all these problems though.