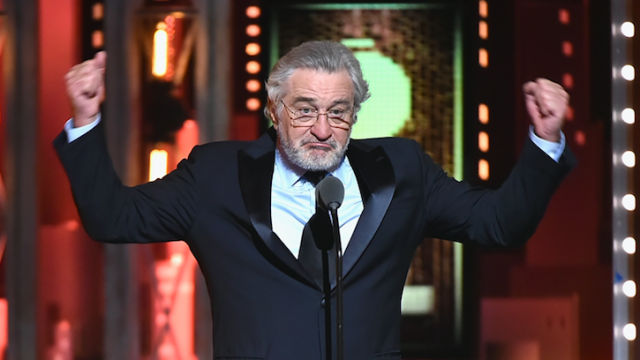 There are a lot of outspoken celebrity critics of Donald Trump and one of the biggest is definitely Robert De Niro, who has made no secret of his hatred towards the guy even before he got into office.

Ever one to live up to stereotypes, De Niro was introducing Bruce Springsteen at the Toni Awards last night when he decided to use his platform to make his thoughts about Trump heard by the masses. This basically meant just saying ‘Fuck Trump’ and then basking in the glory of a bunch of people giving him a standing ovation.

CBS censored what he was saying but the Australian broadcast let it run. God bless Australia:

What an absolute hero. Although I bet at least some people present in that room were definitely Trump supporters and not happy with him saying that stuff. Gotta keep up appearances at awards ceremonies like that though – can’t give off the appearance of being a secret Trump fan can you?

After the commotion finally died down, De Niro did a pretty nice intro for The Boss too:

Bruce, you can rock the house like nobody else and even more importantly in these perilous times, you rock the vote, always fighting for, in your own words, truth, transparency and integrity in government. Boy, do we need that now.

Truer words have never been spoken. Let’s just hope America stands up and listens next time there’s an election in 2018. Still not that confident given the whole George W. Bush situation.

For more Robert De Niro, check him out talking about how he wants to punch Trump in the face. He’s been hating him on for a long time.