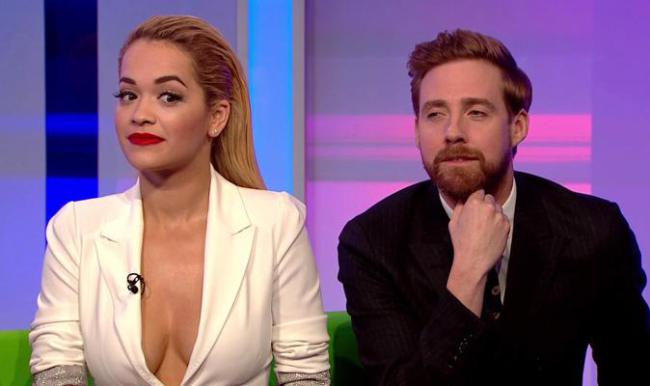 So far 424 viewers have complained about Rita’s boobs.

The UK – and Europe in general – is supposed to be relatively advanced when it comes to sex and nudity and all that stuff (apart from when we’re banning certain sex acts, that is). We’ve got massive adverts all around the country with girls frolicking around in their underwear and the likes of David Beckham’s ball bags lighting up Central London. So why is everyone OK with that and we crap ourselves when Rita Ora wears a low-cut top on ‘The One Show’?

Here are some clips of her appearance spliced together:

Overall, 424 viewers filed official complaints to the BBC, which then released this statement:

The One Show allows guests to choose their own attire and pop stars often opt for something glamorous or striking. We didn’t feel that Rita’s outfit would be outside of most viewers’ expectations of that of a major pop star, but we appreciate that tastes vary. If we had been consulted we would have requested she wore something more suitable for 7 PM.

How is that not suitable for 7PM? Jesus.

You’d think it was a Rita Ora Fappening situation all over again.