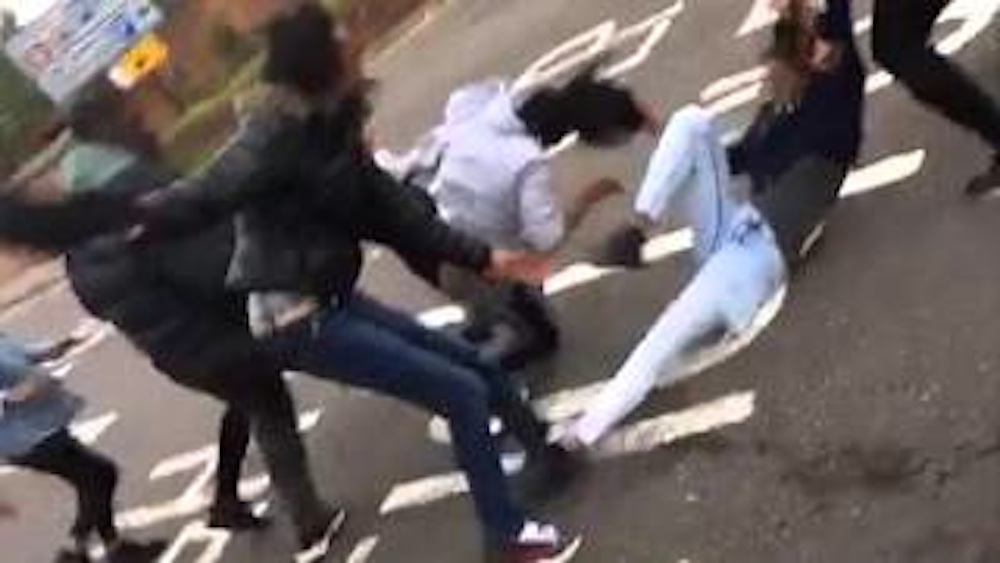 It was all out chaos in east London yesterday.

Hundreds of teenagers swarmed onto a busy high street in Walthamstow yesterday armed with baseball bats and ready to go to war and it was all down to two schoolgirls from different sixth form colleges fighting over the same boy.

This escalated into a full on gang fight between the two colleges, which could only be shut down by roads being closed, traffic being diverted and numerous police officers being called in to break it up. There was also a helicopter involved.

Although that might sound dramatic, when you check out some of the footage below then you’ll see why this had to be the case. There are literally hundreds of teenagers fighting, girls are dragging each other around by their hair on the floor, rolling around on the floor, slamming each other in the heads with baseball bats, and all taking place on a busy high street outside the tube station.

As you can see from that, it looks like a pretty horrendous time, especially if you were just passing through the area and got confronted with all that. The commotion lasted for roughly three hours and was dispersed by the cops by around 8:45 p.m. Two people were arrested for affray and a third was arrested for possession of an offensive weapon. The other 200 or so people appear to have got off scot-free, but Walthamstow MP Stella Creasy is urging people to hand in videos and photographs to the police like a snitch, although it’s doubtful this will actually achieve anything.

Some guy managed to take this photo of the aftermath – lol:

Pieces of weave strewn across Hoe Street. I can't even. #WalthamstowRiots pic.twitter.com/MbiyvoGjZJ

The cops had this to say about the incident:

At the time of the police arrival, the group were not committing offences but their presence in such numbers would be alarming to members of the public as would the volume of police vehicles.

The group slowly started to move after police lines were implemented. This took some time due to the large numbers. “There were some small scuffles in the group but no serious assaults or damage occurred. The MPS Territorial Support Group were called and dealt with a large group who refused to leave.

There will be an investigative review morning where we will review the incident in its entirety.

Wow, sure am excited about that investigative review – I’m sure it will achieve a lot. Really though I’m just surprised that massive riots like this are breaking out in our country all the time now – I mean it’s only just over a week since the cereal cafe in Shroeditch got targeted by anti gentrification protestors which ended in another riot. Baffling.

It seems like something is not right in this country and it’s only a matter of time before the powder keg goes off and things start to go seriously wrong. Here’s hoping we sort it out before that happens.