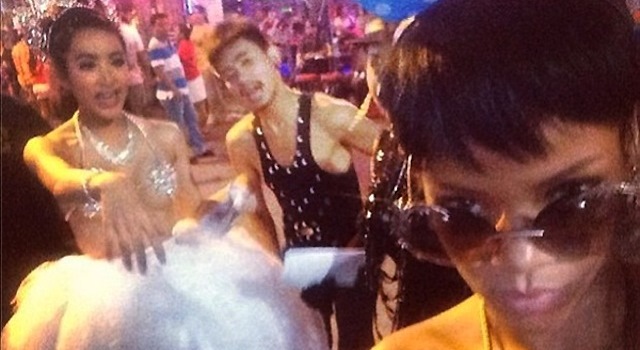 Yet another man has been arrested in Thailand thanks to Rihanna’s inability to do anything out there without tweeting about it.

It wasn’t that long ago we ran the story on the two Thai men who were arrested for breaking the ‘no photography with the endangered lloris‘ rule for Rihanna after she uploaded the incriminating pictures to her Instagram account. Well it appears Rihanna is on another baiting up spree, this time airing out a Thai strip club owner who was running a venue that she visited the night before sending this tweet:

Either I was phuck wasted lastnight, or I saw a Thai woman pull a live bird,2 turtles,razors,shoot darts and ping pong, all out of her pu$$y

Turns out that kind of thing isn’t really allowed, not even when international pop stars are visiting, and so the owner was arrested over the weekend. Yep, that’s right, live animals up vaginas not allowed. Have to make these things clearer it seems.

So if anyone’s keeping count this is the 3rd Thai man that has been arrested thanks to Rihanna’s inability to do anything in Thailand without tweeting or Instagramming it. Remember, everybody’s watching.

â˜› Watch This Next: Rihanna’s ‘Pour It Up’ Video Is Pure Filth