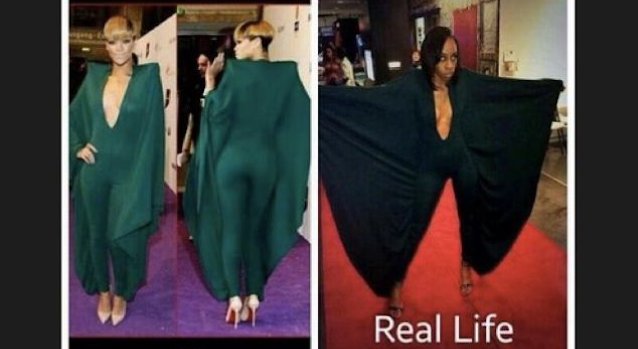 We all know that Rhi Rhi is the good girl gone bad, but this seems slightly unnecessary.

16 year old Alexis Carter thought she had found the perfect dress for her Hollywood themed prom night – inspired by her idol Rihanna, she decided to wear a low cut green dress with wings. Apparently she had a great time at the prom and the dress went down really well. Unfortunately, she then put the photographs on the internet and things got a bit out of control.

In one of the pictures she had her wings spread like a bat, which spawned the hashtag #PromBat on Twitter and led to users photoshopping the hell out of the picture and coming up with a bunch of amusing and not so amusing memes about it. Things really got out of control when Rihanna herself caught sight of the photographs and decided to join in with the trolling of her 16 year old fan, posting a couple of the best memes on her Instagram account, as well as a picture of Alexis next to a Wu Tang Clan logo, which is kinda funny to be fair.

She then started retweeting her favourite jokes about her teenage fan’s unfortunate dress sense, which you can see below.

â˜› More Rihanna: Is Rihanna The Sluttiest Chick At The Barbados Carnival?

Is this really necessary from Rihanna? I mean I’m not one to cry over someone calling me a stupid name or trolling me on the internet because that happens every day (thanks guys) but I think if I dressed up as someone famous and they caught wind of it and then ruthlessly went at me about how crap my costume was then I’d probably be pretty upset/pissed off because it does seem like it accomplishes nothing except breaking this little girl’s heart. Still, I guess we should expect this from Rhi Rhi as she’s the good girl gone bad.

To be fair to Alexis she seems to be taking it fairly well. She’s changed her Twitter background to a picture of a grinning Chris Brown (you go girl) and seems fairly happy to pick up extra Twitter and Instagram followers in exchange for a few days of abuse. On Rihanna’s behaviour she said the following:

‘I was very offended. Why throw shade on it when you had on the exact same thing. The poses was different but the outfit wasn’t. She don’t love her fans like she says she does.’