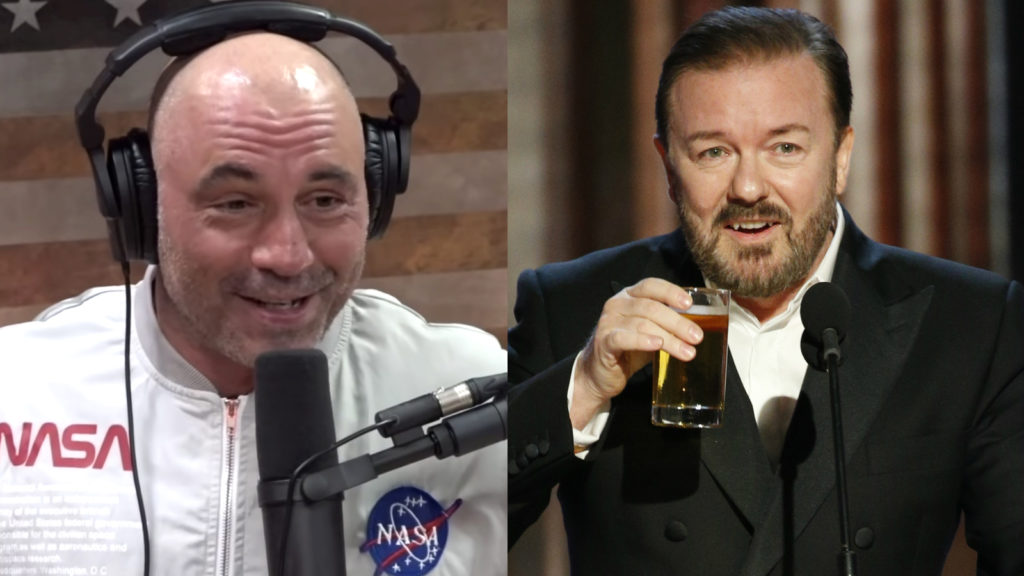 Joe Rogan has solidified himself as the best interviewer in the world in recent years having developed a reputation for insightful, long-form and unedited conversations with famous and interesting guests like Elon Musk, Edward Snowden, Bernie Sanders and Mike Tyson. He’s even got Robert Downey Jr on next week.

During his latest podcast Rogan revealed how much he enjoyed Ricky Gervais’s Hollywood-bashing at the Golden Globes. Didn’t we all?

Ricky got wind of the clip and thanked Joe publicly on Twitter:

Naturally, this got fans of the pair begging for a Ricky Gervais interview on the Joe Rogan Experience:

You two NEED to meet up on Joes podcast!

That would make a brilliant podcast

Please go on his podcast!

Ricky Gervais and Karl Pilkington on the Joe Rogan experience would be the podcast of the decade. Make it happen https://t.co/fXlT5e6FuI

They’ve got a point – imagine how great a Joe Rogan podcast with Ricky Gervais would be. Just the idea of it is comedy gold. Two comedians who don’t care what anyone thinks of them just shooting the shit for a couple hours. Rogan can ask Gervais if he’s ever tried DMT, and Ricky can volunteer Karl Pilington to try it on the next series of ‘An Idiot Abroad’.

Update: Turns out the two of them have actually been on-air together before – as guests on the Opie & Anthony Show a few years back (although Ricky seems to have done all of the talking):

Both have come a long way since then – hopefully they make it happen in 2020.

For the time the navy pilot who tracked ‘Tic Tac’ UFO went on Joe Rogan and confirmed aliens are real, click HERE.