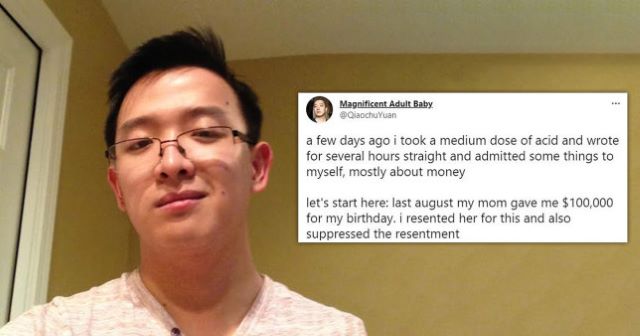 He’s facing quite the backlash.

If you were to trip on acid and come to an unbelievably enlightening and personal realisation about yourself, it would probably be a good idea to talk to a therapist about it. What you shouldn’t do is Tweet a massive 35-page thread on Twitter about it, especially when your epiphany involves how much you resent your parents for giving you $100,000 for your birthday.

Qiaochu Yuan AKA the appropriately-named ‘Magnificent Adult Baby’ on Twitter says he took a ‘medium dose of acid’ a few days earlier, and wrote for 12 straight hours where he found himself in a dialogue between his sober self and his psychedelic self.

Here’s what he came up with…

a few days ago i took a medium dose of acid and wrote for several hours straight and admitted some things to myself, mostly about money

let’s start here: last august my mom gave me $100,000 for my birthday. i resented her for this and also suppressed the resentment

then i had to move out of my group house

i wrote for maybe 12 hours straight and it eventually turned into a sort of spontaneous dialogue between the person i am on acid and the person i am sober; acidQC and soberQC

“the truth is that your finances aren’t separate from your parents’ finances and they never have been. you resent your mom for sending you $100,000 because she forcefully reminded you of this fact”

“but that’s just not true. you actually do not need to earn the right to exist and you never have. the reason you’re alive right now and not starving to death on the street even though you haven’t had a job in 3 years is because your parents send you money because they love you”

“the truth is that for you money is a game you play with your parents. the most important thing you do to get money is to not piss off your parents so much that they cut you off”

my whole picture of the relationship between money and “labor” and “deservingness” shifted. at one point acidQC said “love is literally more real than money. if people love you enough they will literally give you money”

it’s relevant background here that i’ve carried around for a long time a sense of guilt about having disappointed literally everybody who’s ever tried to employ me. i don’t feel like i’ve ever been paid for successfully doing the work i was hired to do

it feels a lot easier to think about now that i am admitting to myself that the real stakes have nothing to do with not starving to death on the streets. acidQC said “the truth is the most important consequence of running out of money will be having to explain it to your parents”

my parents paid something like $175,000 of tuition to MIT out of pocket because they wanted me to have a good education and a good life. they were paying for all of my living expenses in both college and grad school. i never talked about this with anyone, really

i recognize that i’m speaking from a position of extreme privilege here but this wasn’t all upside. my parents took care of me materially at the expense of taking care of me emotionally. it took me until this trip to even kinda experience the money they spent as an act of care

and like i kinda get why they did that but it led to me being incredibly sheltered in a bunch of ways. they never even made me do chores. i was very spoiled and in retrospect it wasn’t good for me

the stakes are that the less money i make the harder it’ll be for my parents to retire. my dad literally told me that. he said he was holding off on retiring because he was worried about me

the other stakes are about dignity. acidQC said “you need dignity much more than you need money” and that sort of blew me away a little. like… shit pic.twitter.com/1DVofYWxKM

i have 8k followers on twitter tho 😅 hi everyone

oh, also, the *medium* dose of acid was incredibly important. some of the most meaningful experiences of my life happened on 100+ ug of acid and/but those experiences were really walled off from my sober life and interpolating between them with an intermediate dose was amazing

Far out, man. I mean I get his point – that many parents throw money at their children, pay for everything they need, and don’t necessarily give them the love and guidance they need to make their own way in life and so they essentially end up a bit useless. As in Yuan’s case, coddling your kids well into adulthood can make them resentful of you when they inevitably fail on their own and blame the parents for their own inadequacies, because they were never taught to stand on their own two feet.

Most of the comments on Twitter were not sympathetic…

this is the worst fucking thread i’ve ever seen. shut the fuck up freak

wow that’s rough man, i mean i’ve been homeless since my apartment burnt down last year but i guess being handed a hundred thousand dollars could give one a sad too

Bruh you need therapy, not acid trips and twitter.

Your father is putting off retirement because he thinks he’ll need to keep subsidizing your lifestyle in chunks of tens of thousands of dollars. Let that sink in.

You can afford professional counselling. Get it.

I am SO sorry.

I won’t bash you simply for being fortunate enough to have parents tossing you $100,000 cash for your birthday, or even for burning through it so quickly (many of us struggle with financial responsibility) but god damn you took entirely the wrong lessons from your acid trip

Yeah, fair play to the guy for being honest and opening up but I don’t think Tweeting a massive thread about it was a great idea. Not to mention he seems switched on enough to have done something amazing and productive with the money, rather than moan about having received it. But hey, we’re all human. Even though Yuan’s circumstances are infinitely better than so many other people’s, he’s still a man working through crippling guilt and lack of self-esteem. Again though – best to see a professional about it. Onwards and upwards, Yuan!

To meet the co-founder of a $2billion start-up who was fired for taking LSD at work, click HERE. Very unfair!