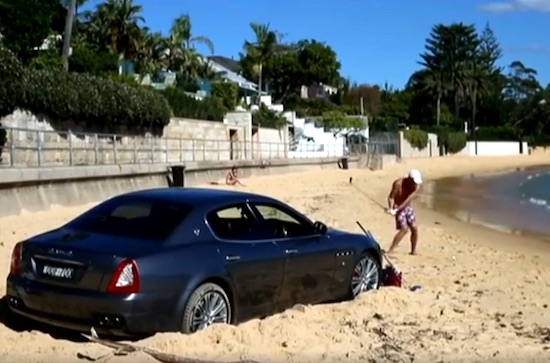 So much money that he’s got no need for human decency.

It’s a well known fact that you should never take your car on the beach as it’s probably going to get stuck in the sand and you’re going to look like an absolute knob. Or there’s the alternative option, which the guy in this story plays out perfectly.

Nobody knows his name, but he’s a 51-year-old unemployed rich Australian who sounds as if he’s completely coked up from his actions. He drove his Maserati onto Camp Cove in Watson’s Bay Sydney, got it stuck and then calmly proceeded to take his top off, shoot golf balls into the sea, smoke cigarettes and be very loud and obnoxious to everyone in the vicinity until the cops showed up:

Not really sure why that surfer was complaining – the guy seems like an absolute legend to me and he’ll probably be telling that story for the rest of his life. Not sure why the cops were such dicks about his behaviour too and made him go to the hospital, but I suppose it is a bit outrageous, so they had to do it for his own safety. Still, they seemed a bit heavy handed about it. I rate the guy personally.

For more coked up behaviour, check out this gang of coked up seagulls that kept a whole street awake. Unfortunate.