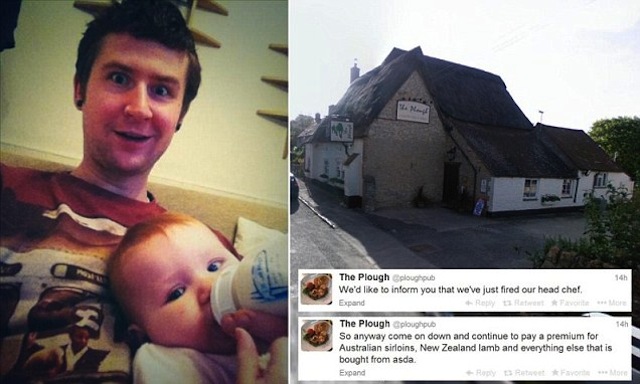 You don’t need to be a genius to guess what happened next.

Another day, another massive social media faux pas. This time it’s The Plough pub in Oxfordshire who decided to fire their head chef over the weekend – even though he has just had a new baby and it’s one week before Christmas – allegedly because he wanted to take a weekend and Christmas Day off to hang out with his family, which seems like a perfectly reasonable request but obviously wasn’t for whoever owns the pub.

Unfortunately for them though they forgot that the chef – whose name is Jim Knight – also ran their Twitter account and well, you can guess what happens next. Check out some of his tweets below, which clearly don’t paint the establishment in the best of lights. What’s even funnier is that it’s almost a day later and they still haven’t been deleted – presumably because Jim hasn’t given them the password.

On his personal account, Jim said that he’s also been offered a job as a result of his Twitter antics, although he didn’t say whether this was as a chef or in social media:

I have very kindly been offered a serious job offer directly off the back of this twitter storm. More info to follow x

The landlord of The Plough –  a guy called Mr Potts – offered the following statement regarding the allegations Jim made in his tweets: ‘When Jim, as head chef, informed me that he would not be working on Christmas Day, and other Sundays in the near future, I was left with little choice but to end our arrangement. I had been quite clear with him when he started here that Sundays are our busiest days of the week, and that all our chefs have to work that day. Certain staples come from our nearest supermarket, which is Asda, but the implied suggestion that we are buying cheap meat and passing it off at a premium is, frankly, outrageous and untrue.’

It seems a bit like a case of six of one and a half dozen of the other really doesn’t it? Only thanks to Twitter it got to be played out in front of the whole world, and Jim has definitely come off looking better out of it.