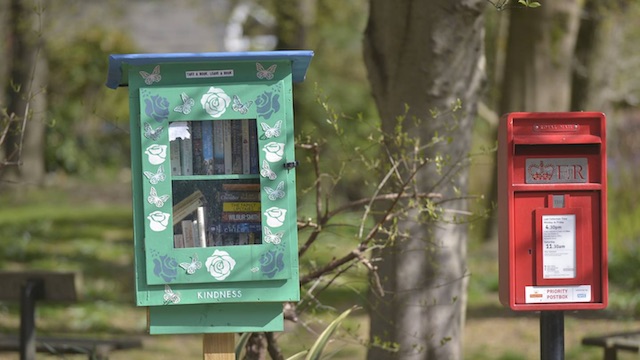 These kind of stories are always so funny.

The kinds of stories where some people that live in the middle of nowhere get super angry because something very slightly out of the ordinary happens are definitely my favourite genre and this one about some pornography turning up in a shared library is another doozy.

We’re in Cornholme, West Yorkshire for this one where a communal wooden box has been set up for residents to exchange books once they’re finished reading them but I don’t think any of them expected to find a copy of some pornographic literature in there when they stuck their nose in recently. I wonder what it was? ’50 Shades Of Grey’ no doubt.

Anyway, one resident was so outraged that they left the following strongly worded note on the outside of the library, accusing a nearby village of pranking them:

Whoever is placing the copies [sic] of pornographic literature in here, stop!

If this filth is to your liking may we suggest that you move to the cesspit that is Hebden Bridge.

Lol I didn’t realise that we were still living in the 1850s, but clearly up in Cornholme it’s a different story.  Love the way that the note was spelled incorrectly and really badly space out as well. I don’t even know how you could achieve a spacing level (is that what you even call it?) like that. Really something special.

Of course, I can only hope that whoever is putting the pornographic literature in the library continues to do so and that the strongly worded notes continue. You absolutely love to see it.

For more of the same, check out when a pensioner wiped out a village’s broadband for 18 months by turning on an old TV. What a joker.