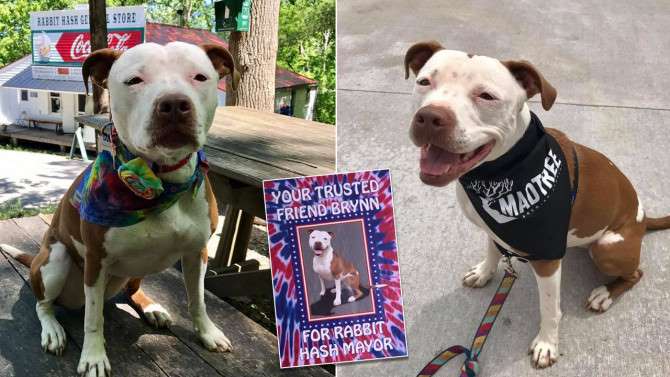 With so much negativity going on in the world, we thought you guys needed perking up, so we’ve decided to bring to you the story of Brynneth Pawltrow.

This pit bull was rescued by owner Jordie Bamfort when she was just a puppy and now she has gone on to do great things. In a recent election at a Kentucky town, Brynneth was voted as the local major, beating out a cat, chicken and donkey.

I’m so proud of her.

Apparently the electing of animals started out as a joke in the 90s, but has become a much-loved local event and opportunity to raise money for the town.

Since being elected, Brynneth has been fulfilling duties including appearing at fundraisers, being pet by locals and taking naps by the river. You know – all the important stuff.

To be completely honest, she just has to show up.

Her duty so far has been to be a representative for the town.

Cute. Although her responsibilities don’t sound all that important, it seems like she’s doing a far better job from a political sense than other current US politicians. Donald Trump, we’re talking about you.