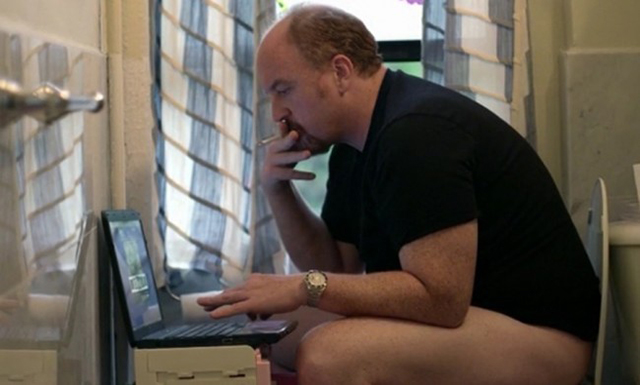 You have to feel for this guy.

This is possibly the saddest thing we’ve come across today — even sadder than War Machine’s suicide note.

It involves a man who has gone through his entire life sitting on the piss bowl with the toilet seat up, because he was never taught how to use the toilet properly.

From Reddit’s TIFU (Today, I Fucked Up) section:

So I’m hoping a load of people are going to come out in support of me here but I’ve got that sinking feeling I may be alone in this.

Our toilet broke so I was in shopping for new ones and the sales person joked (no doubt for the millionth time) that I’ll want one that automatically puts the seat down after I’m finished with it. I ‘joked’ back and said if I didn’t have a wife I could save money and not buy one with a seat and I’d never have to hear women complaining about putting it down again. To which he gave me a strange look and said “but what about when you need to poop?”. I naturally pointed out that I’m a guy and therefore don’t put the seat down, I sit on the rim of the bowl. Several embarrassing moments later, I realize that I’ve misunderstood my entire life and that guys do indeed use the toilet seat. I left empty handed and red faced.

Thinking about it now, it makes sense. Especially how men’s restrooms have seats. But I just assumed it was a unisex/cost saving/oversight deal.

What a poor fucking bastard. We thought we’d better write it up in case there are other unfortunate souls out there who never learnt that you should put the toilet seat down to do a number 2.

Has he been taking dumps in public toilets as well? Fucking hell.

Never mind, we’ve got you covered in all poo-related situations. Here’s one that will definitely come in handy at your house share — the Top 5 Ways To Hide The Fact You’re Taking A Shit.

Related Items:bowel movement, Experience, how to poo properly, how to use toilet, number 2, Reddit, Toilet, toilet seat down