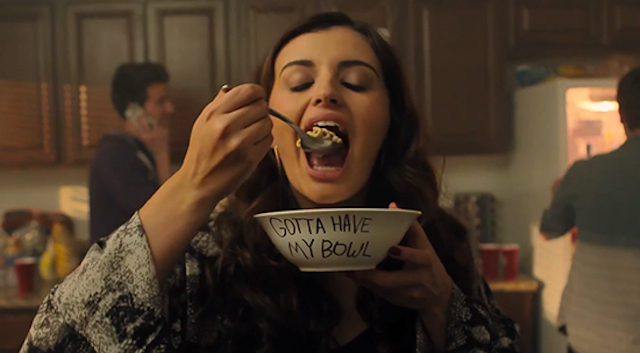 How did it take so long for this to happen?

This had to happen really didn’t it, the only question really being why the hell did it take so long? Yep, that’s right, the two year wait is finally over as Rebecca Black has released her follow up to the most annoying song ever (after Call Me Maybe) and it’s imaginatively entitled ‘Saturday’. She’s also enlisted some buddy of hers called Dave Days to rap on it.

The song itself is nowhere near as catchy as Friday and is kinda slow and not that good, so it will probably bomb as everyone will watch it to see how dumb it is and then won’t remember it or won’t ever play it again because it actually sucks and not in a ‘so annoying it sucks because it’s actually kinda catchy’ way.

It’s worth watching it once for the video though because it’s really stupid and tries to make Rebecca Black look like an edgy party girl, despite the fact that she’s 13. There’s also a bunch of really WTF moments in it too, like when she’s on the phone to some dude and telling him to get down and he says he’ll be there as soon as he finds his pants (cringe) or at the end where a black guy gets randomly arrested at the party, which probably symbolises the problems associated with race in modern society or something equally as groundbreaking.

Oh, and Rebecca Black is full on butters right now too.