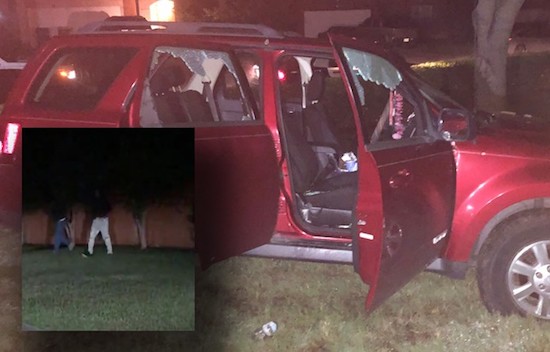 The home invasion genre of horror movie is all too popular these days, but despite how scary these movies are I don’t think many of us realise how truly terrifying they are until we watch a video like the one below.

In the video, a 19 year old girl is arriving home at her house in Converse, Texas where she becomes fairly distressed that there are some guys in ski masks crouching down in her garden, presumably trying to hide but not doing a very good job of it because they kinda look like Vanessa Feltz trying to hide behind a french fry. Anyway, the girls get a bit stressed out about this obviously and called the police and that’s when all hell breaks lose.

This is a very intense and harrowing video so if you’re of a nervous disposition then turn away now:

I normally don't post on Facebook but this is a true ACTION & AWARENESS post. WARNING: This is very hard to watch! It hit very close to home as I have been in this situation before. This was my 19 year old niece coming home late last night in Converse, Texas (San Antonio, Texas) to some home invaders in her bushes.. NOW JUST PAY ATTENTION TO THE RECKLESSNESS our society has come to! GET THIS TO THE MEDIA. These guys were out to MURDER anything moving last night and they have to be dealt with. This is to be treated as if they murdered everyone in the car! If you want to be active contact Converse, Texas police department (210) 658-0898 to make sure they are on their game. GET THIS TO THE MEDIA.. #dontwaitfordeath #CNN #HEADLINENEWS #ROBINMEADE #CONVERSETEXAS Police Chief Fidel Vellegas (210) 658-2322 email: pdchief@conversetx.net

Jesus. Kinda sucks that it got cut off because it makes you think that they might be dead, but from what I understand on the Facebook post, it looks like the girls and their mother were OK but their car was completely smashed up. It looks like the intruders managed to get away before the cops showed up though.

What completely freaks me out about this video is the fact that even though it looks like they were only trying to rob the place, that the guys had absolutely no qualms about abandoning this course of action and just straight up trying to murder the girls who stumbled in on it. That’s completely terrifying to me and it looks as if they’re lucky to be alive considering how bad their cars got messed up. Terrifying.

For more of the same, check out this guy who got murdered in a home invasion just weeks after winning the lottery. Don’t flash the cash.