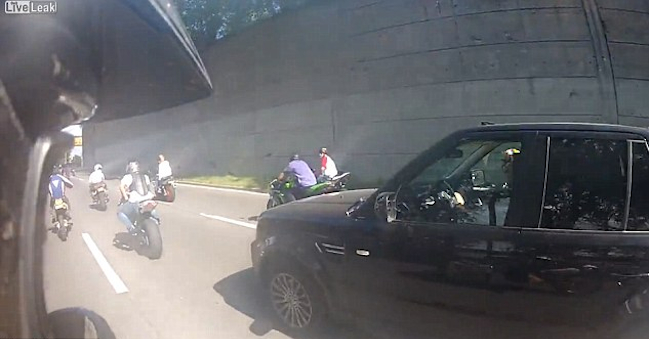 Here’s a 6 minute video of a motorcycle gang chasing a black SUV around the streets of New York City and then smashing it up.

Most of us have probably been locked in our bedrooms for the past couple of weeks sessioning GTA V any chance we get because that’s just what happens every time a new GTA game comes out. Obviously the best part of GTA is doing loads of ridiculous and outrageous driving manoeuvres and other completely violent activities that you would never, ever be able to get away with in real life unless you were a true badass and that’s why everyone loves playing it.

But this video that emerged yesterday is perhaps the closest I’ve ever seen anything like GTA happen in real life. It basically follows a motorcycle gang (and when I say gang, there’s a hell of a lot of them) along the streets of New York as they chase after a black SUV. Nobody knows at this point why the motorcycle gang was after the SUV but it seems pretty serious if they’re willing to chase him for five minutes and then smash up his car to get a hold of him. Apparently the SUV driver was with his wife and 5 year old kid too, which makes the whole situation even more messed up. The video is still really entertaining though.

The camera – which incidentally is on the helmet of one of the biker’s so you get a POV video of the whole chase – unfortunately cuts out when the SUV is pulled over and one of the bikers smashes a window with his helmet, but that might not be such a bad thing as it might be kind of gross to actually watch someone get beaten up in front of their family by a motorcycle gang. The NYPD confirmed that the driver of the SUV did get battered and his face got slashed up, but that he was OK now and had been treated for his injuries at a local hospital and discharged. The NYPD are also currently investigating the incident too, so hopefully we’ll be able to find out why the hell this happened fairly soon too.