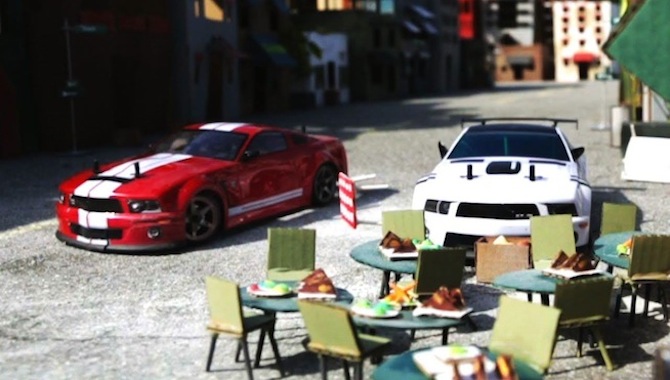 Did you enjoy Remote Control cars when you were younger? These guys still love them, and they’ve made a clichÃ© movie car chase using a miniature town and RC cars and helicopters. It is epic.

I haven’t played with remote control cars for a long time. I used to love them back when I was a wee whipper-snapper, although I was pretty shit at actually controlling them. I mainly used remote control cars to chase my cat around the kitchen or to smash into my brother’s feet. And if I were to have one now, I would probably do exactly the same thing.

I’m a man of simple pleasures.

The guys in this video for instance – they have gone through what looks like a whole lot of effort to make a clichÃ© movie car chase scene using RC cars. And it is completely sick.

I love the internet.

For every rank little corner of cyberspace full of women doing terrible things to sea creatures, there’s something like this. These guys have gone to the effort of making this miniature town, complete with tiny road signs and cafe tables, and then they run it all over with a van. All for a 1:34 minute video on YouTube.

If you watch the making of video below, you’ll see how much effort was involved in producing just over a minute’s worth of footage.

It is a pretty damn incredible minute of footage though.

Brazilian Cops In Helicopter Vs Drug Dealer In Car