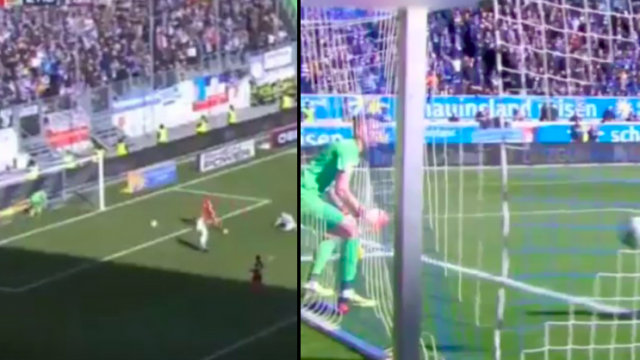 There’s nothing more annoying when you’re playing FIFA and the game throws out some outrageous glitch which causes you to concede in the game.

What possibly makes it even more annoying than just losing is that half of the glitches that the game throws out would never, ever happen in real life. Or so we thought before we saw the video below which was taken from the 2. Bundesliga over the weekend in the game between Duisburg and Ingolstadt.

In the video, Ingolstadt striker Stefan Kutschke finds himself clean through on goal with the Duisburg keeper Mark Flekken nowhere to be found, literally standing transfixed in the squat position in the back of the goal mouth tangled up with the nets. Seriously never seen anything like this before and the only way to describe this is like a real life FIFA glitch:

I mean what the hell? If that happened to you on FIFA you would be throwing your pad against the wall so I can’t imagine what it must have been like for all the Duisburg fans and players. Absolutely incredible scenes.

If you’re trying to figure out what actually happened, apparently Flekken went to pick up his water bottle in the back of the goal because he thought nothing was going on, then when he turned around and saw Kutschke clean through he just froze still because he couldn’t believe what had happened. Terrible excuse but I suppose it at least kinda makes sense. Still can’t really believe that it happened – not exactly the kind of reactions you’re looking for from your goalkeeper.

For more of the same, check out this outrageous compilation of FIFA glitches. They never get old.