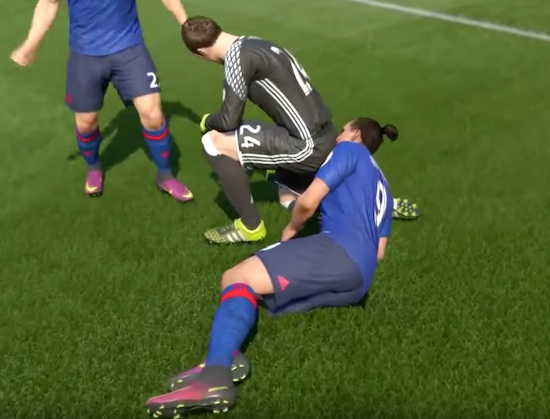 Every year when the new FIFA comes out, it’s a massive occasion for gamers all over the world. But despite the fact that EA Sports have had a whole year to make it, there’s always a shitload of glitches in it every time.

Even though it’s only been out for a week, one dude has encountered so many FIFA 17 glitches that he’s managed to make a five minute fail compilation of them. It’s mainly goalkeepers scoring for no reason and footballers fucking each other, but we’re not complaining because as usual, it’s completely and utterly hilarious.

Yep, can’t get enough of that shit, can you? Best one was definitely when that guy hits the penalty so slowly that the goalkeeper dives the other way but still manages to get back and save it. That must have been an absolute bummer.

I also liked it when Ignacio Piatti was black for some reason?  Part of me almost thinks that they keep these glitches in to get even more publicity for the game.

If you want to know how to score from a corner every time on FIFA 17, click here. That’s gonna be some useful information for when you’re playing your mates.