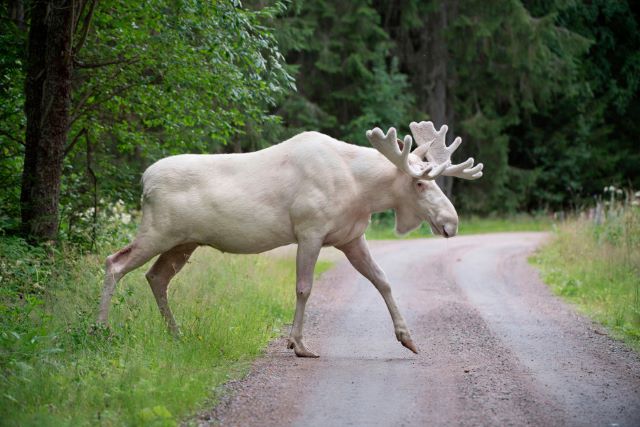 Wow this is sad.

First Nations in Canada are mourning the loss of a rare white moose, asking why anyone with a license to hunt would choose to kill their sacred “spirit” animal.

In Timmins, Ontario, two female moose were found shot and left discarded along a service road, bodies intact, including a rare, sacred white moose. The poachers had seemingly ignored the many signs warning against killing these legally protected creatures.

Everybody is outraged and sad. Why would you shoot it? No one needs one that bad.

If you have a license to shoot a cow moose, you could shoot another one. Just leave the white ones alone.

“Just leave the white ones alone?” Bit controversial. This isn’t a white moose privilege issue though, it’s about the rarity of these majestic creatures! The rare white moose get their unique colouring from a recessive gene, and are as rare as white bison, raven and grizzly bears.

It saddens me that somebody would take such a beautiful animal. Nobody knows exactly how many are in the area, so the loss of a single spirit moose is one too many.

Just look at how amazing these creatures are:

Can you imagine having that beautiful moose in your sights and pulling the trigger? I can’t. A regular moose? Probably, if you’re into hunting and have license to hunt. But if you’re a hunter and you come across this animal, surely you have to know that this is a rare, special specimen. What you don’t do is shoot it dead for fun and just leave it in the road. No wonder everyone’s so vexed about it.

Not to mention Chief Murray Ray said there are signs all over the place reminding hunters not to shoot the white moose specifically. Not that you should even need those signs, but evidently they just ignored them. You should be able to feel it in your bones that these white moose are not for killing!

Wildlife officials are now asking locals to help find the killer. Animal activists and a sympathetic drilling company have thus far pooled $8,000 ($6,121) for anyone who can lead to the culprit.

Maybe hunters tried to get one moose and got the other by accident. If a person does come forward and admit what they did, I would put my portion towards any of their legal fees.

There’s so much negativity in the world today. It’s nice to just see some people banding together and trying to turn this into something positive.

Well, sounds like they’re ready to give this hunter the benefit of the doubt. Show yourself, whoever you are! Let the world know you didn’t kill this majestic white moose on purpose. Or if you did, just lie about it I guess.

For the hunter who shot dead his 18-year-old son after mistaking him for a moose, click HERE. See? Accidents happen.