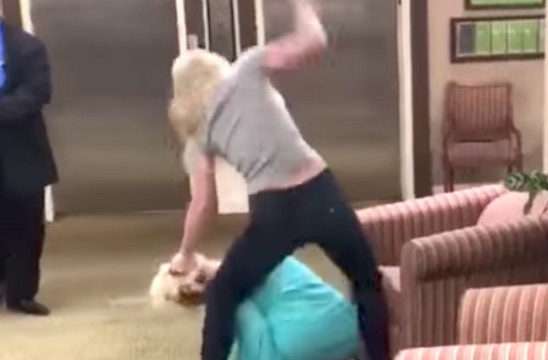 There’s never usually an excuse for attacking someone and beating the absolute crap out of them, but I think it is acceptable when you’re acting in self defence and the person in question is being racist towards your mixed race children. Then they deserve the mother of all ass whoopings.

Step forward Colleen Dagg who was being abused by 39 year old Summer Cortts in a hotel lobby for having mixed race kids, and when Cortts put her hands on her she had had enough and unleashed some fists of fury. Stone Cold Steve Austin would be proud:

Girl got told. Love the way that she’s bleating on to the cops when they arrive about whatever crap she’s talking about whereas Colleen Dagg is just quiet and respectful and they just let her go. Everyone knows if you’re talking to the cops you don’t wanna act all hysterical because they’re gonna absolutely hate you as it’s a certain sign of guilt. Idiot.