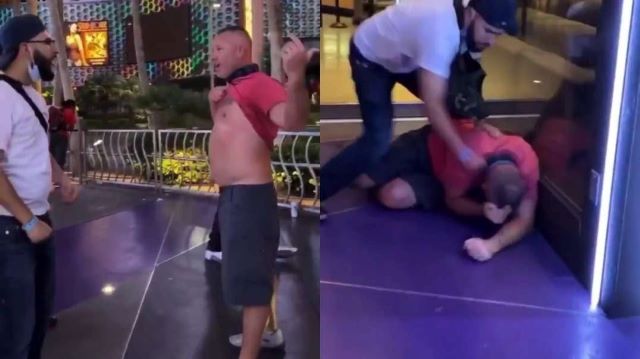 What did he think was gonna happen?

We all know that racists aren’t very bright to begin with, but showing off your swastika tattoo to a group of Mexican dudes in the street? Well that’s just begging for an ass-whooping and that’s exactly what this man got.

Shout out to whoever laid the soundtrack over the video too – really adds another quality dimension to the footage:

Welp, I guess wearing a UFC shirt doesn’t magically make you tough after all. It doesn’t even make you the slightest bit intimidating. Fair play to the racist’s son for trying to come to his rescue but he’s probably a racist too so can’t feel too badly about him getting slapped as well. Cheers dad!

I wonder if they went home to wife/mum after and told her they both got beat up by a group of Mexicans? The car ride home will have been silent AF, that’s for sure. In fact they were probably just talking racist shit the whole way home. Which I guess proves that violence doesn’t solve a thing but at the end of the day, if it has to happen, why not have a pair of racist scumbags on the receiving end of it?

To watch a bunch of Asians get into a massive fight at a house party and keep calling each other the N-word, click HERE. WTF?