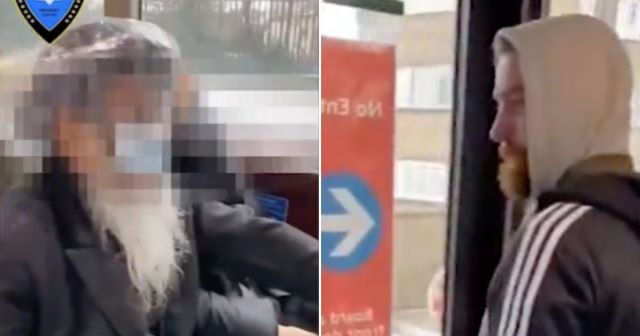 What an absolute wet wipe.

A chavvy idiot who sounds like he was 2 brain cells left fighting for survival was filmed racially abusing a Jewish couple for 10 minutes on a London bus this week.

The little twerp comes out with all the old classics – ‘go back to your country’, ‘you think you can f*ck with us English?’, ‘you don’t own this country’, and all the rest of it. Meanwhile the baffled old Jewish man sits there with his shower cap on while his wife tells the chav to leave them alone:

Wow, what an absolute wet wipe. Just a truly disgusting specimen. Imagine if this prat was really the representative that got to decide who is English or not? You’d forfeit any English you had in you and move to Tel Aviv.

Not sure why the bus driver didn’t pull over and call the police instead of just driving on like nothing was happening. Is the protocol to keep driving as though everything is normal? Maybe he triggered a silent alarm and the chav just got off the bus before police got there?

According to Metro, no arrests have been made thus far, although the CCTV images are clear enough. A spokesman for the Metropolitan Police said:

On the evening of Monday 8 February 2021, police were made aware of a video clip of a racially aggravated incident that took place on a bus near Manor House tube station at around 12.45pm that day.

Initial enquiries were carried out from officers from the Central East Command. Given the incident occurred on a bus the investigation it has been passed to the Met’s Roads and Transport Policing Command to investigate.

Let’s hope they track this waster down sooner rather than later.

For the racist man who got KO’d into oblivion on the London Underground last summer, click HERE.