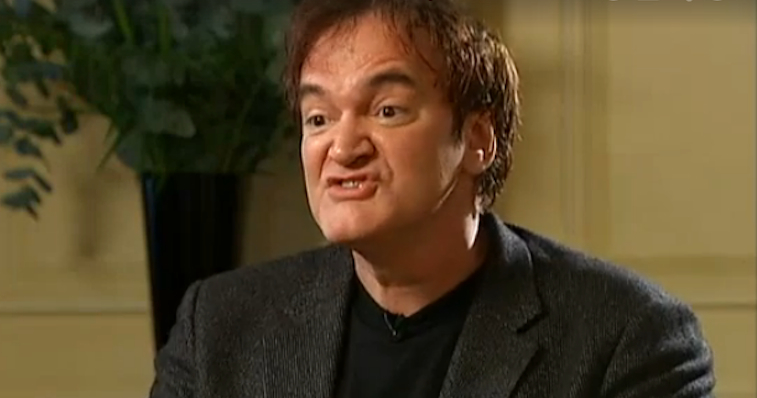 Quentin Tarantino might be one of the greatest directors of our generation, but like any great director he’s pretty eccentric. Watch him have a total meltdown in this recent interview with Krishnan Guru-Murthy – ‘I’m gonna shut your butt down.’

Most people were probably really excited when they saw that Quentin Tarantino was finally making another movie and it was going to be a Western and it was going to have Leonardo Di Caprio and Jamie Foxx in it, even if when the first trailer came out it did look kinda schlocky and crap. I mean, that was probably what he intended because he loves crappy 70’s pulp movies like that and normally when he tries to make one it turns out fairly decent (Jackie Brown was really good, Deathproof was OK I guess)  so even if the trailer looks kinda lame I’m probably gonna go and see it and at least give it a shot because Tarantino doesn’t normally make bad movies. So yeah when Django Unchained comes out next week in England I’ll probably be going to the movies at some point to go and see it.

To promote its release over here, I guess Quentin Tarantino and Jamie Foxx and some other members of cast have been over in the UK doing press and interviews and appearing on a bunch of major TV shows. I don’t really see why they would have to do this because it’s fairly obvious that a new Quentin Tarantino movie is going to do a lot of bank at the box office (and definitely in DVD sales because EVERYONE wants to be that cool guy who has a bunch of cool DVD’s on their shelf) because everyone loves Quentin Tarantino movies so I don’t know why the production company just doesn’t save a load of money on press and spend it on making new movies instead. But whatever, QT is over here and he’s doing an interview with Krishnan Guru-Murthy for Channel 4 News.

And Quentin Tarantino went pretty crazy at Krishnan Guru-Murthy when he asked him what he thought the link between real life violence and movie violence is, which is obviously a question that is pretty pertinent when you’re Quentin Tarantino and your movies are notorious for their violence, but as he mentions in the interview he’s discussed this issue numerous times before and doesn’t feel the need to talk about it now. Which I guess is fair enough but come on Quentin you’re doing an interview just answer the goddamned question, otherwise you’re just gonna look like a complete mentalist. Which I guess is gonna get more promo for your movie but I don’t think there’s any reason to have the meltdown that he does in this interview and say that he’s ‘shutting ‘Krishnan Guru-Murthy’s butt down’ and rant and rave about it for three minutes like he does in this video. Maybe they didn’t have any girls backstage for him to suck on their toes while he was masturbating or something.

â˜› More: Quentin Tarantino – The Best Bits In Two And  A Half Minutes