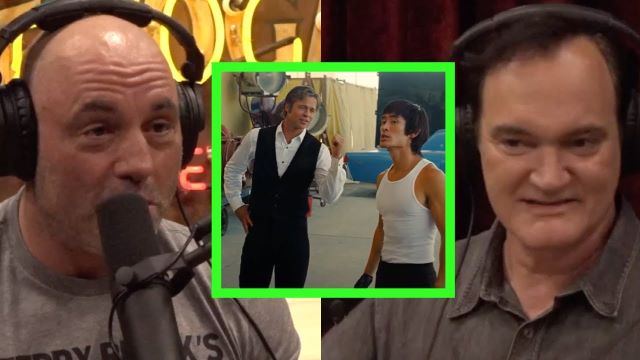 He says only Bruce Lee’s daughter has the right to complain.

‘Once Upon A Time In Hollywood’ was a typically epic Tarantino movie, but one criticism many people had was how Bruce Lee was portrayed in the film; basically as an arrogant idiot who gets made a fool out of.

Well Tarantino went on the Joe Rogan Experience the other day and when asked to respond to the criticism, had this to say…

Well, I guess that’s fair enough really. It would make sense if Bruce Lee’s family members or friends had something to say to Tarantino about it, but everything else is just recreational bandwagon outrage as far as he’s concerned. It did look like Rogan wanted to defend Lee a little bit more but would rather not open up an even bigger can of worms about it.

At the end of the day though, was Tarantino’s portrayal of Bruce Lee as a person accurate? Kareem Abdul-Jabbar, with whom Lee trained and appeared in Game of Death, said:

Of course, Tarantino has the artistic right to portray Bruce any way he wants. But to do so in such a sloppy and somewhat racist way is a failure both as an artist and as a human being.

Mike Moh, who played Lee in ‘Once Upon A Time’, says he was conflicted at first:

Bruce in my mind was literally a god. Bruce didn’t always have the most affection for stuntmen; he didn’t respect all of them. Tarantino loves Bruce Lee; he reveres him.

According to Lee’s friend, stuntman Gene LeBell, Lee had a reputation for “kicking the shit out of the stuntmen.”

They couldn’t convince him that he could go easy and it would still look great on film.

Bruce Lee’s daughter Shannon filed a complaint with the China Film Administration affecting the film’s release in China unless alterations were made that didn’t make her dad look bad. In the end, China cancelled the release of the film one week before its release date.

Well what can you say really? If Bruce Lee was an arrogant dude who took liberties with stuntmen, then fair enough if Tarantino portrays him that way. Not being funny but his daughter was only 4 years old at the time he died, so it’s not like she knew him enough to say Tarantino’s portrayal was outright wrong. Either way – who cares? The film was amazing and the Bruce Lee scenes were great. Can’t wait for Tarantino’s 10th and supposedly final movie sometime in the near future.

For a look at what Quentin Tarantino says is the greatest movie of the last decade, click HERE. Kinda surprising choice tbh.