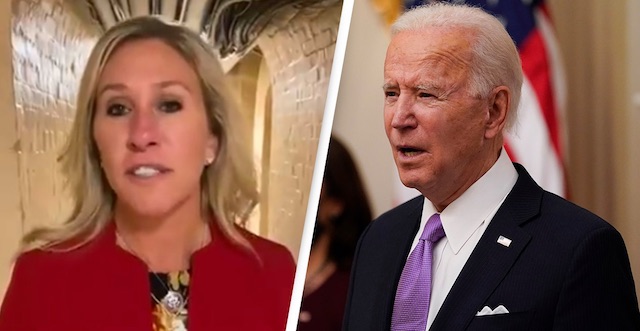 You kinda thought that all the craziness of the last four years in America might die down now that Joe Biden has been inaugurated as President, but it seems like this isn’t the case at all as a member of congress that openly supports QAnon has decided to file articles of impeachment against the guy.

Marjorie Taylor Greene is a newly elected Republican congresswoman for Georgia who has known ties to the QAnon conspiracy theory and announced earlier this month that she would be filing articles of impeachment against Joe Biden once she officially came to power. She’s now announced via Twitter – after a brief ban for sharing misinformation lol – that these files have now been submitted, claiming that Biden isn’t fit to be President due to his links with Chinese and Ukrainian energy companies.

I just filed Articles of Impeachment on President @JoeBiden. pic.twitter.com/mcwEEkKiHL

Sounds serious doesn’t it? The only problem is that the Democrats now control the Senate and the House Of Representatives as well as the Presidency, so there’s literally a less than 0.1% chance that the impeachment process will have any chance of success and in all likelihood it will probably get thrown out straight away.

Seems dumb that a Congresswoman would waste her time doing this with no chance of success, but then again she is a QAnon supporter so she probably isn’t that smart in the first place. How are these people getting elected?

For more of the same, check out how QAnon supporters reacted to Biden’s inauguration. Some of the dumbest shit I’ve ever seen in my life.