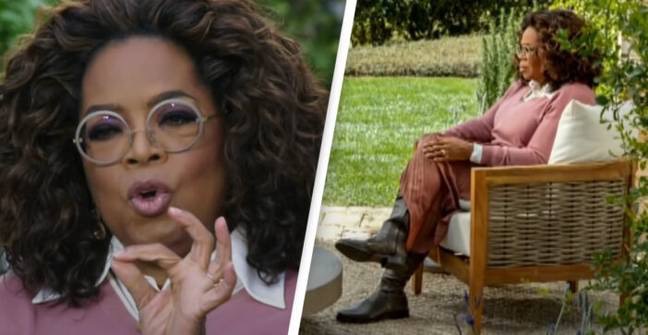 This is the dumbest one yet.

I’ve tried to avoid the fallout of the Meghan Markle interview last night, but this stupid take on the situation from QAnon supporters was too stupid to ignore.

Following the interview, the popular QAnon channel ‘We The Media’ posted on Telegram about whether or not Oprah Winfrey was wearing an ankle monitor during the interview. Predictably, the replies flooded in with most users agreeing with the observation:

Roxanne F: So obvious, first few minutes she was strategically keeping both her feet behind that little table then got comfortable or forgot about need to conceal it … she should fire the camera man.

Mrs Kennedy: People keep arguing that it’s a microphone pack… but why would that be on your ankle?

Stroud Mom: At the furthest point away from the mouth, and where the microphone would pick up on any time she repositioned herself, in her seat? I don’t think so.

Why does Oprah have an ankle tag? pic.twitter.com/e1jIPjlGeK

I mean great? But why would they think that that little bulge in her shoe was an ankle tag? And what would it even mean if she was wearing an ankle tag? That she had been placed under house arrest for some unknown crime that still allowed her to conduct an interview with two of the most famous people on the planet? Give me a break – these QAnon supporters really need to get a life.

For more of the same, check out CNN interviewing a bunch of QAnon supporters who believed that Trump would become President again on March 4th. How did that work out for them?