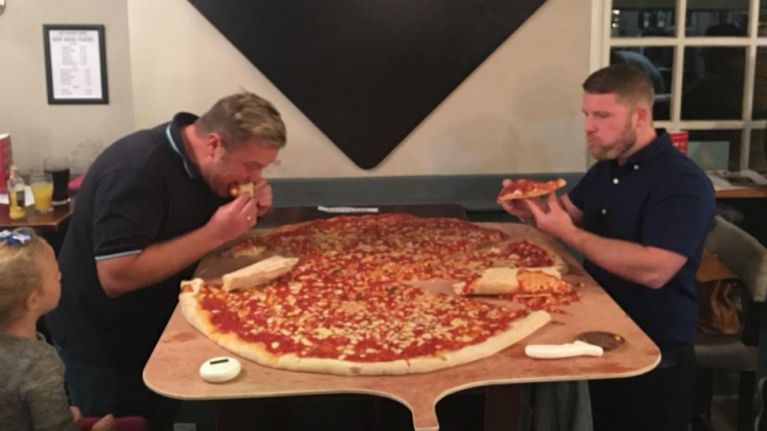 Two people. Half an hour.

As far as eating challenges go, this one has to be one of the most ridiculous because it’s about three times as large as the biggest pizza I’ve ever eaten and everyone knows pizzas get exponentially bigger the larger they get. How is anyone gonna hope to eat this mofo, even with the help of their buddy?

Nevertheless, Mwah Pizza at The Carters Arms in Wilmslow, near Manchester, is offering this whopping 40 inch pizza challenge. The pizza comes as a margherita with your choice of two toppings – although you might wanna leave those off if you’re hoping to actually finish it all – and you and a friend get half an hour to eat it all. If you do so, then you get your £50 back for the pizza – yes, £50 – and your name on the wall of fame.

There’s also the option of buying the pizza on its own for £70 if you don’t fancy doing the challenge and you know, sitting there eating a pizza for the rest of your life. If you still think you might be able to beat this, here’s a video of a dude bringing it out to the table and what some guy who attempted it said about it:

It is a brutal challenge.

After 15 minutes into it I was fuller than I’ve ever been!

After completing the City to Summit 20 hour endurance event in Scotland, the last 15 minutes of the pizza challenge felt much worse than that.”

For more of the same, check out when people were dipping pizza into milk. What the hell is that all about?