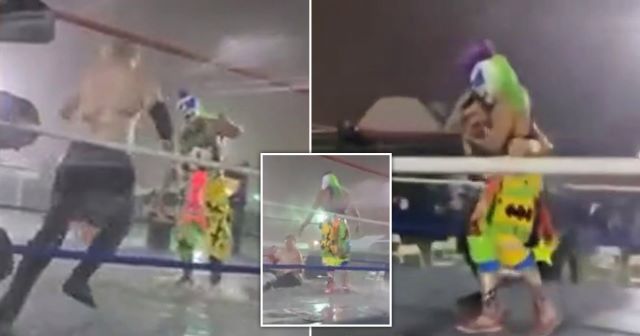 Insanely unsafe on so many levels.

The world of wrestling prides itself on the ‘show must go on’ mentality (RIP Owen Hart), but two wrestlers over in Camden, New Jersey took that to a new level as they battled through a whole damn thunderstorm this week.

Mexican wrestler Psycho Clown took on Brandon Kirk in I guess what we’re calling a Thunderstorm Deathmatch? Flash Flood Street Fight? It just starts pissing down as soon as the bell rings:

Welp, that was just insanely unsafe on so many levels. Have to think they broke a few health & safety regulations there but it looks like everyone made it out alive so that’s good.

I went with a buddy, truly an insane time. Psycho flew straight from Mexico to come to this show (~100 people), one rain delay earlier in the night.

He showed up maybe 30 minutes before his match. The second they rang the bell, torrential downpour.

Credit where it’s due – I was expecting an absolute shit show of a match given the circumstances but it actually wasn’t too bad? Fair play to Psycho Clown and Brandon Kirk for powering through it, and to the fans who stuck around to watch. Not to sound like an old man or anything but it’s pretty wild to think how easily someone could have slipped on the top rope and broken their neck.

Can’t imagine the WWE risking something like this. Oh who am I kidding you just know Vince McMahon is setting up a thunderstorm match between John Cena & Roman Reigns as soon as he gets wind of this.

To watch a lad use a piledriver in a real-life fight to end a dispute in the middle of the street, click HERE. That’s got to hurt.