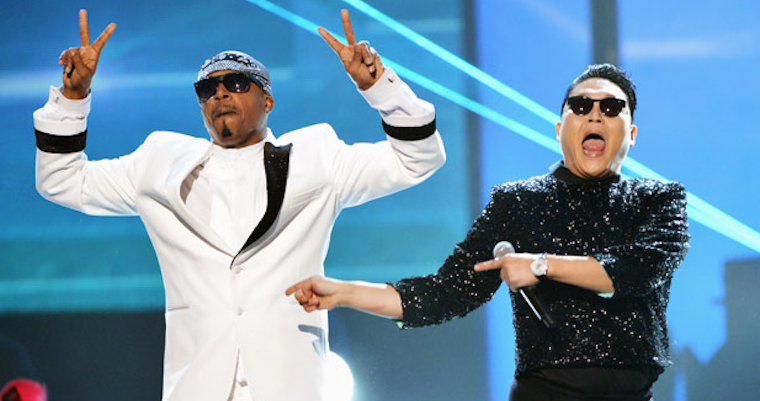 Finally, two icons of modern day stupidity have been brought together to perform a stupid dance routine. Everyone in the world is going crazy.

Well, how the hell did it take so long for this to happen? Surely it was completely obvious when Gangnam Style became a worldwide phenomenon that he would have to get together with the only other person who has a possibly stupider catchphrase and dance combination than him, MC HAMMER? I can’t believe nobody thought of it sooner, I mean now that it’s happened it just seems so obvious. The venue was the AMA’s (which I guess stand for something like the American Music Awards? I don’t know and can’t be bothered to look it up) which were no way as cool as the EMA’s (did you see Matt Bellamy’s cool sunglasses?) but kinda blew it out of the water at the end when PSY and MC HAMMER (you just gotta capitalise his name every time you write it btw) teamed up for the last performance of the night.

Everyone watching at home – and in the audience, which we’ll get to in a second – was probably just stoked that they were getting to see Gangnam Style live and figured PSY was just gonna play his stupidass song and that would be the end of the show and they could finally go home after seeing loads of boring awards being presented, but no, PSY threw a real curveball and when everything went silent he shouted ‘STOP, HAMMER TIME’ and there he was MC HAMMER himself in the flesh. WOW. Where the hell has he been since 1991? Or whenever his animated series got taken off the air. Yeah, I dunno how many people know this but MC HAMMER used to have a cartoon series. If you don’t believe me here’s a clip from it:

Pretty crazy shit right? Why the hell is he rapping about magic shoes? And why the hell is he rapping SO BADLY? Anyway, after MC HAMMER came out of nowhere him and PSY danced to some mashup of Gangnam Style and 2 Legit 2 Quit, which I guess is another MC HAMMER song that isn’t ‘CAN’T TOUCH THIS’ that nobody really remembers. The remix is pretty sharp though and MC HAMMER legitimately still has some killer moves and it’s just great to see two icons of modern day stupidity side by side. As a bonus too, you also get some great shots of idiots in the crowd trying to do the Gangnam Style dance and just looking like legitimate losers. Most of them are awkward white people too which makes it even better. There’s a particularly good shot around 4:15.

Enjoy the video below:

â˜› More: Teacher Takes On Student In Dance Off , Completely Schools Him